The phenakistoscope was invented in 1832, by Belgian Joseph Plateau, a physicist, and his sons.  It is an early animation device consisting of a disc or drum which rotated, showing successive images through slits, often via a mirror, which then produces an illusion of motion.


Interestingly, it was also invented in the same year by Simon von Stampfer of Vienna, Austria, who called his invention a stroboscope.  But instead it was used to make a moving image look like it was slowed down.  It works in the same way as strobe lighting.


I read somewhere that Plateau got his inspiration from Michael Faraday (1791-1867), an English inventor, well the Michael Faraday wheel invented by him.  The Michael Faraday Wheel worked using magnetic discs that repelled each other and produced electricity.  Well that’s in short. It was Plateau who then took Faraday's wheel and turned it into a toy that he later on named the phenakistoscope.


So how does the phenakistoscope work?


The phenakistoscope consisted of two discs mounted on the same axis. The first disc had slots around the edge, and the second contained drawings of successive action, drawn around the disc in concentric circles. But instead of the discs moving in opposite directions like in Faraday's Wheel, the phenakistoscope's discs spin together in the same direction. When viewed in a mirror through the first disc's slots, the pictures on the second disc then appear to move.


It was later that the Zoetrope was then invented.  It became more popular because you no longer needed a mirror.  Mind you, to see how that is possible partner up with someone else who has also made a phenakistoscope and try it out…  you will no longer need a mirror like a Zoetrope.


Cardboard (cereal cardboard thickness will do) How useful are cereal boxes!
Paper
Glue
A paper clip
Some templates or my instructions on how to make your own…
A protractor
A compass
Pens and Pencils
scissors
A ruler  (I wanted to say rule but no one ever calls then that anymore)


If you use a template you will need to get a piece of cardboard and, with the glue, stick the template to it and cut it very, very carefully out.  It will take PRECISION to make this work at its best.  Colour in between the slits at the back in black, this makes it easier to focus on the animation.


Then all you need to do is carefully poke a hole in the centre using the paperclip or the end of a compass (use a piece of play dough or plastercine underneath to make it safer so you don’t poke holes in yourself).  Then it’s ready so go look for a mirror and spin it and try to stay focused at ‘one picture’ to make the animation really effective.


If you want to have a go at making yours from scratch here is how to do it but remember it has to be exact measurements and is not easy.


This is my own design that I’ve made after seeing how a few have been made but carefully measured out it works.  It’s tried and tested.


1.      First you will need to draw as big a circle as possible on a piece of A4 thin card of a larger side of a cereal box using a compass.
2.      Mark the point where the sharp end of the compass was positioned when drawing the circle with a pen or pencil.


3.      Using that marked point replace the compass (on the same piece of paper) but this time make a smaller circle about 5cm smaller in diameter than the big circle.


4.      Draw a line down the centre splitting the circles into 2 equal semi circles.


5.      Now you will need to draw your animation. Choose between 8 to 12 frames and make the animation. 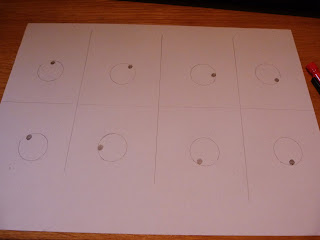 Of course you could use it for a 10, 11 or 12 frame one as well.  Others, if you are better than me at art might be a dog or horse running, someone swimming,  a cube rotating anything that has a repetitive pattern, anything that can go round in a cycle.

6.      When you know how many frames you have you can then go back to your circle you’ve drawn and divide it into as many segments as you have frames.  So a bit of maths: if you have 8 frames you take the 360⁰ that make a full circle divide it by 8 (the number of frames) and that will tell you that you need to have 8 wedges 40⁰ apart. 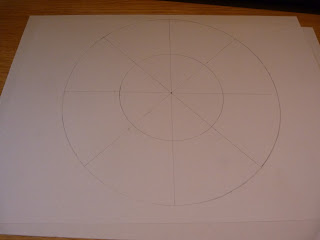 7.  Carefully draw your animation inside the smaller circle.
8.  Cut out the whole circle carefully the along each segment line cut out a thin rectangular slit
2mm by 2.5cm so it now looks like this... 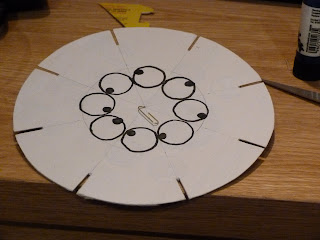 9.      Make a hole in the centre of the circle using your paperclip.  WATCH YOUR FINGERS!
10.  On the back of the circle, in between each of the slits you could colour it in a dark colour, black is best.  This helps the eye focus on the animation when you are ready to watch it. 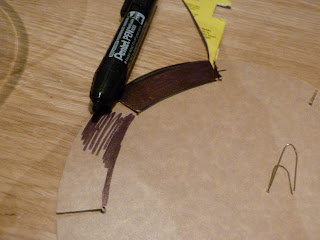 11.  Now all you need to do is unbend one half of a paper clip and insert it through the hole you’ve made.  Then bend it so it doesn’t fall back through but freely allows you to spin the phenakistoscope.


12.  Now you are ready for a mirror.  This works best in a bright room.  To view your animation look through one of the slits and try to focus on just one spot of the animation when it spins and you should see your creation come to life!  Cool hey!