STEP by STEP: How to make your own bubble wand!

Today was a take it easy day after all that walking yesterday.  Mind you saying that it didn't stop the girls from playing out the back for ages!  I kept Harmonie in for the first hour, she had been so tired.  I read to her some of her Disney Magazine.  It was all about Doc McStuffins and a bubble machine breaking down which lead us to making this... 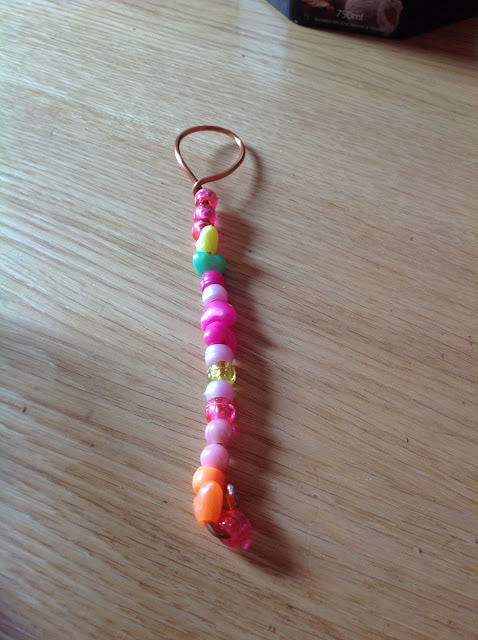 Harmonie loves beading so it was up her street.  All I needed to make it was:

1. Wire cutters
2. Beads
3. Copper wire (quite a thick wire)
STEP ONE
Cut 20cm of wire and then loop one end twisting the wire like in the photo below.  If you are working with little people this part is best done by an adult, although I'm sure my 8 and 10 year old would be fine with it.
Be sure the the copper wire is twisted tightly and then really squished together! 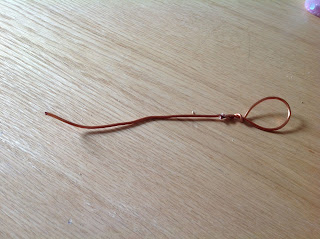 STEP TWO
This step is also best done by an older child or an adult - place the first 3 beads over the twisted bit of the wire until you cover up the sharp bit. STEP FOUR
After that with only a little bit of help to be sure she didn't hurt herself my (very nearly) 3 year old threaded the rest of the beads herself until there was about 2cm of wire left at the end.
STEP FIVE
Again for older children or the adult - using pliers (or the pliers part of the wire cutters) curl the end up at the bottom of your bubble wand like this... 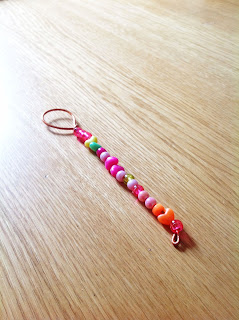 and then again like this so there are no sharp bits! 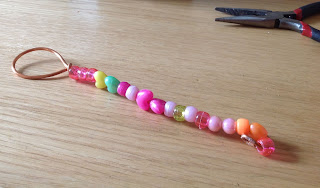 Then with some bubble mixture or a solution of 50:50 washing up liquid and water (Fairy liquid was the best for us) you could also add a couple of teaspoons of glycerine too.
NOW you are ready to dip your wand in and blow bubbles! 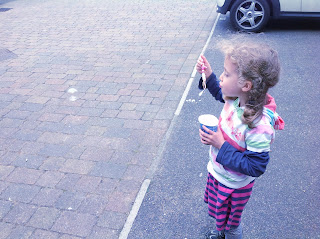 Of course where there is bubbles there is science!
A bubble is a thin film of soapy water. Most of the bubbles that you see are filled with air, but they can be filled with other gases too like when we filled ours with hydrogen in our experiment: Making Hydrogen go pop or the carbon dioxide you find in a bottle of fizzy drink.   The film that makes the bubble has three layers.
A thin layer of water is sandwiched between two layers of soap molecules.  Soap molecules like these have a polar that is hydrophilic (Hydrophilic is an adjective meaning: having a tendency to mix with, dissolve in, or be wetted by water.)
In a bubble each soap molecule is oriented so that its polar that is hydrophilic faces the water, while its polar that is hydrophobic moves away from the water layer.
We can make more bubble wands and experiment.  Make them a different shape, like a square or triangle.  Does it change the shape of the bubble?
No?   That's because no matter what shape a bubble has initially, it will always try to become a sphere.
Why?  It is because a sphere is the shape that has the smallest surface area, scientists refer to this as minimal surface structures.  The geometric form with the least surface area for any given volume is always a sphere.  This is also true of balloons too!
Posted by Lisa Gwinnell at Tuesday, May 21, 2013