How good does this look... 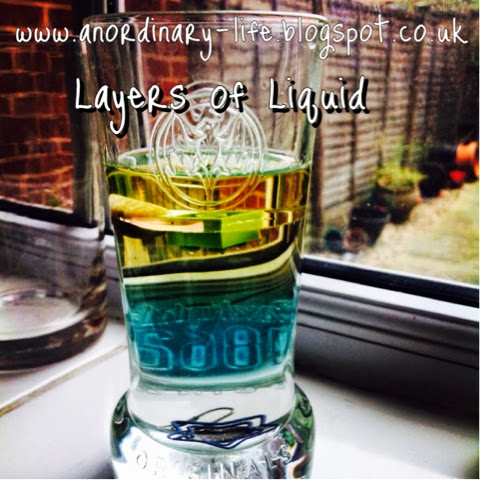 Do you want to have a try?  Here is how we made ours and all the science behind it too...

First you will need to have these things in:
You can add other things like milk, ping pong balls, honey, isopropanol, raisins, beans...  infact, anything liquid or any solid small enough to fit in the glass will work -experiment with it.
To prepare you need to make a salt water solution by adding 10ml of salt to 30ml of water (the ratio we used) and stirring until all the salt has dissolved, we added food colouring for fun, this is optional but an easier way of seeing what is what when you have finished pouring it all in.
We also added a different colour food colouring to the water for the same reason.
If you want to be more scientific with this project you might like to measure out all your liquids exactly, 30ml a time I would recommend.
When you add the other liquids it is really important to pour them out REALLY slowly, preferably down the side of the glass.  We added ours in this order:
When you have added them all you will have something that looks a bit like this: 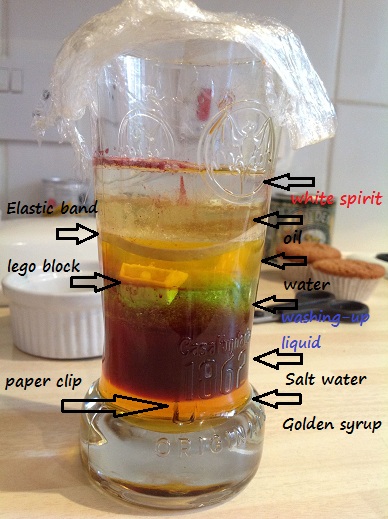 The results of the experiment cause great excitement and if you want to leave the white spirit out (to make it safer to play with if you are doing this with younger children) you can - you can use milk or honey instead and see where that sits.

So why does this happen?


It's all about density - the amount of material there is per cubic measurement.  All these things have a different density.  This chart shows us the density of each of the liquids in our experiment, which shows us that the more dense a material is then the further down the bottom of the glass it sits. It also shows us that, for example, water sits in between the oil and washing up liquid because it is more dense than oil and less dense that the washing up liquid.
If you weigh 20ml of washing up liquid and 20ml of oil you will see the washing up liquid weighs more, this is because weight and density are closely linked.  You will also see that the lighter the liquid the closer it is to the top of the glass, the heavier the closer to the bottom.
The equation to find the density of a material is:
Density = Mass divided by Volume.
This table shows the different densities of the liquids we used.


The salt water density depends on how much salt there is in the water.  All of these densities were taken from research via the web so they might not be 100% accurate but they are close and certainly give us a good idea of what is going on.
Honi particularly liked it when we dropped the solid objects in at the end.  First we hypothesised about where they would all end up.  When we dropped them in we talked about where they all sat in the glass; we talked about how the elastic sat just under the oil so was more dense than the white spirit and the oil but less dense than the other liquids beneath it.  We also talked about how the piece of lego sat in between the washing up liquid and the water so it was more dense than the elastic band.  We thought the paper clip might sink right to the bottom, but as you can see it didn't quite!

For more experiment check out my science pages there are over 100 experiments to try!
Posted by Lisa Gwinnell at Thursday, May 16, 2013