How to make a peashooter!

Yes a pea shooter! Yes it can be used as a weapon and therefore you should be careful with it.  With my youngest I give her pompoms to use and with my older three, when we are outside, at the park where there is plenty of room, we use small stones or nuts like this pistachio in the photo. 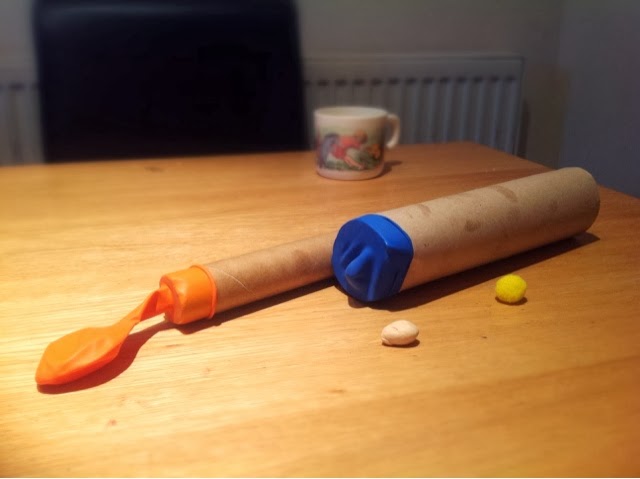 The best bit about this is there is science involved, it teaches us about the science behind guns in the most simplest way I could think.  It is a quick, simple and inexpensive to make and it makes for a great toy too!

So, if you fancy having a go yourself here's how we made ours... 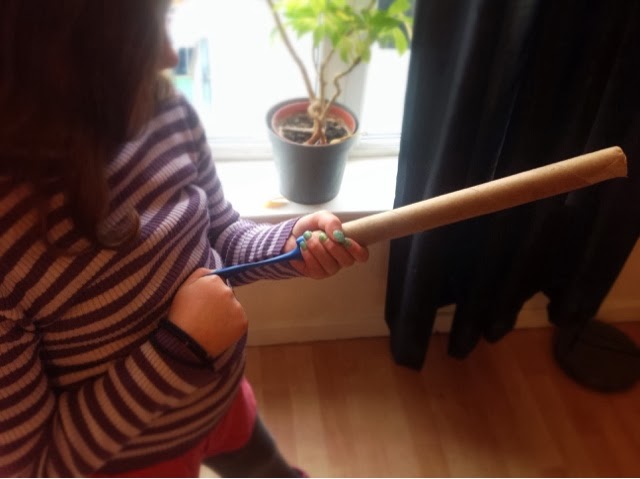 Why does this happen?
As you pull back on the balloon you create potential energy.  When you release the balloon the elastic properties force the balloon in the opposite direction to which the balloon had been pulled (Newton's third law of motion) creating a thrust force, in other words push force, this force is what pushes your bullet (whether it be a pompom or a nut or even a small stone). It also pushes the air inside the tube forward which increases the air pressure in the barrel (AKA your cardboard tube) which gives the bullet added thrust.
Experiment:
Try different bullets pompom, grain of rice, a small bead, a nut or a smooth stone.  (Remember the heavier the object the more dangerous the peashooter becomes.
Try different length and widths of tubes.
Try pulling your balloon different amounts.  You could be more scientific with this and measure with a ruler how far you are pulling it back each time.
If you want a really short barrel you could try a film canister but you will have to saw of the end.  Again be careful!
Disclaimer
I do not take any responsibility for any injury or personal damage resulting from the miss-use of the information in this blog post.  I do advise you be very careful as this is a weapon and can be dangerous.  Do not aim at any living being.
I recommend that protection is used to protect against backfires and ricochet.  Please remember that the completed weapon, your peashooter, is very dangerous although safer with the pompom for smaller people.
Never aim the pea shooter at a person. Even a very light object such as a tiny berry can cause serious injury at close range due to the high muzzle velocity (the speed at which the bullet travels out of the tube).
To Avoid backfiring ensure that there are no holes in your balloon otherwise things could get painful!
The heavier the object the more damage it can do!
You could use a longer object like a pencil as an arrow but you really need to be super careful and be sure when you pull your balloon back that the longer object is completely in the tube.  This is VERY DANGEROUS I recommend that you do not do it!
PLEASE HAVE FUN BUT PLEASE BE VERY CAREFUL!
Bullet - is the projectile that shoots out of the barrel (our cardboard tube) and hits the target.
The propellant - usually in guns this is the gunpowder which when made to explode increases the air pressure in the barrel and forces the bullet out at high velocity.  In our case it is the balloon that we use as the propellant when we pull it back.
Ricochet - When the bullet rebounds off of something
Back fires - the opposite happens to what is supposed to, in this case the bullet breaks through the balloon and hits you!
Muzzle velocity - the speed at which the bullet travels out of the tube
Acceleration - the rate at which an object changes its velocity.
Propelled - Drive or push something forward
Elasticity - the ability of an object or material to go back to its normal shape after being stretched or compressed - stretchiness.
Air pressure - in this case the air pressure is increased with the thrust force caused why releasing the potential energy held in our balloon when we stretch it.
Potential energy - energy that is being stored and waiting to be released.
thrust force -  the push force that, in the case of this peashooter, demonstrates Newton's Second Law of motion: the heavier the object the more force is required to move it and his third: for every action there is an equal and an opposite reaction.