Science: How does your brain work?

This is a fun way to learn about the main different parts of the brain!


For this I am going to use play dough to make a brain, simply because it’s really easy to get a variety of colours and for this brain all we will need is 6 different colours of play dough! 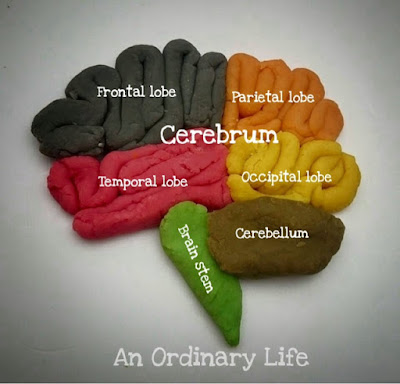 There are the six main parts of the brain and they are separated.  Each part doing different jobs.  I will go through the jobs of each part of the brain as we do this activity.
STEP ONE
We will start with the Cerebrum.  The Cerebrum is made up of four parts which are known as lobes.  WE will start with the Frontal Lobe.
Roll out your first colour.  Curl it up like a worm and shape it so it looks something like this… 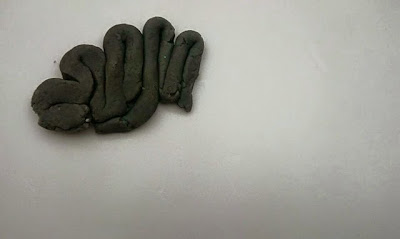 This is our Frontal Lobe.

It is where our personality is formed.  It is our conscience, where we decide what is good and bad.  We consider consequences of our actions.  Logic and forming sentences as well as number sequences.

The Frontal lobe is where we control our movements. The brain is able to take control of the muscles in the body via the spinal cord.

Now get your second play dough colour.  Roll it into a worm like shape and then shape it something like in the photo below, putting it next to your frontal lobe.  This is your parietal lobe! 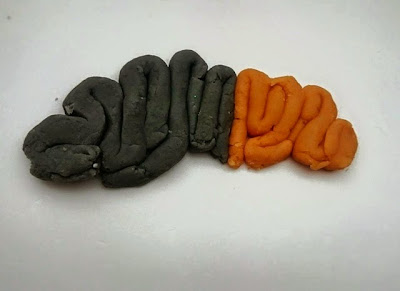 The main sensory signals from the skin, which is touch, temperature, and pain receptors, pass through the thalamus to the parietal lobe.

The parietal lobe is important for processing language.

Now we are going to make the Temporal lobe.  This fits just underneath the frontal lobe.  Chose a third play dough colour.  Again roll it up and make a shape similar and place it under the frontal lobe to the photo here... 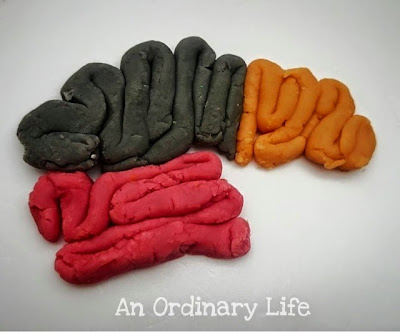 The Temporal lobe controls and manages: speech, listening, smell and helps us to understand language – to comprehend.  Without our temporal lobe we would not be able to understand someone who is speaking.  The temporal lobe makes sense of all the different sounds and pitches being sent to the brain by the receptors of the ears.

The last of the cerebrum lobes.  Choose your fourth play dough colour.  Again roll it into a worm like shape and then form it into a shape like below fixing it under the parietal lobe and next to the temporal. Like so... 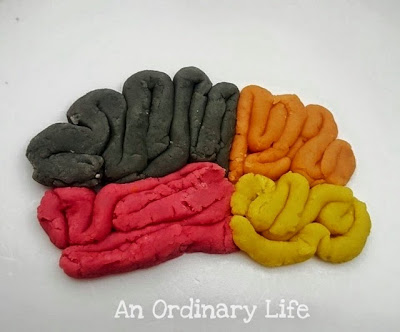 This part of the brain, the occipital lobe, is at the back of your head.  It controls vision processes.

For this part of the brain just choose a fifth colour. Shape it like a raindrop squash a little and then place it so the brain model looks like this… 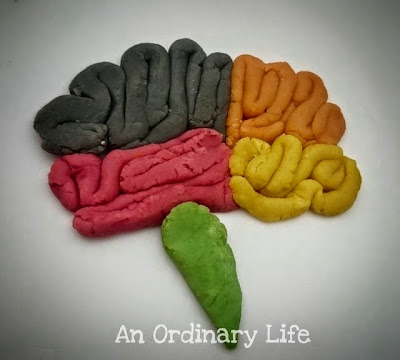 The brain stem controls essential life functions like breathing, blood pressure and your heart beat, things we don’t have to think about, our body just does them.

The last piece of the brain we are going to make is the cerebellum, for this we will use our last colour of play dough.  You won’t need as much this time.  Roll it up into an oval-like shape and squish it slightly.  It should fit just underneath the occipital lobe, like so... 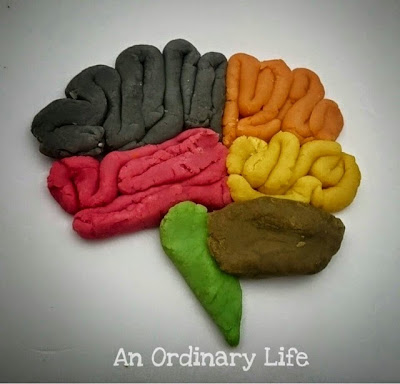 This part of the brain controls basic body functions and is called the cerebellum.  This is the part that helps us with our co-ordination, posture and balance.