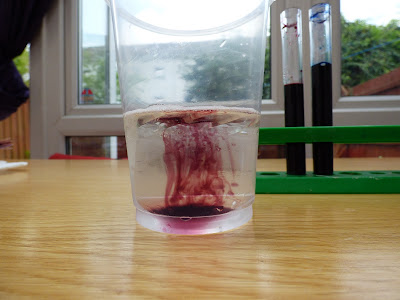 This happens with liquids and in gases.  As gases are more difficult in an experiment to show children how diffusion works I will use this experiment which involves liquid, in this case water. 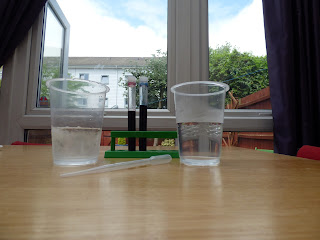 500ml of water to one large clear cup and 500ml of hot water to the other clear cup.

You will need a responsible adult present as you are dealing with hot water.

Now get your pipettes.  Add 2ml of one colour to the centre of the top of your cold water.

The colder the water the better, so long as it is still in liquid state.

Now add 2ml of the second colour in the centre of the top of the hot water.

As I said, in this experiment we will look at how temperatures effect the rate of diffusion.

The diffusion of food colouring in hot and cold water showed us clearly how temperature effects the rate of diffusion, with the process being much faster in hot water than in cold water.

This is because heat provides energy and the energy from the heat makes the molecules up and makes the move faster so the diffusion process works quicker.

The cold can take a lot longer however it will eventually completely diffusion into the water, which is of lower concentration (as it has no food colouring in to start with) until the whole cup is full of equal amount of concentration.

Concentration gradient - gradient is the change in the volume quantity.


Diffusion is something that happens in the body, at the alveoli.  As we breath in air, the air that arrives has a higher concentration of oxygen than the air in the alveoli sacs.

This increase in concentration creates a concentration gradient for oxygen what causes the oxygen to diffuse through the thin walls of the alveoli and enter the blood in the capillaries that surround the alveoli, that's being pumped around the body by the heart.

This experiment helps us understand how and why the exchange of these gases happen and is one of the experiments I use to demonstrate to kids how this happens.