Science: A cloud in a bottle experiment

In this post I will show you how to make your own cloud in a bottle and at the same time learn how they are formed. 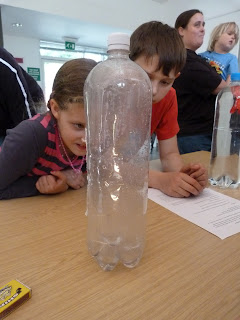 First you will need:

Right now for the FUN…


Take the bottle and put 2cm of water in the bottom.


With the lid off the bottle, light a match let it burn for a second and then blow it out and drop it into the bottle.  You can also try dropping the match straight into the bottle as the water and the lack of oxygen will put out the flame.

REMEMBER: BE CAREFUL NOT TO BURN YOUR FINGERS.  CHILDREN SHOULD HAVE A RESPONSIBLE ADULT SUPERVISING AT THIS POINT.


Tighten the cap of the bottle tightly and as quickly as you can after dropping in the match.


Squeeze the bottle REALLY HARD for about 5-10 seconds while, at the same time, giving it a swirl.


Stop squeezing the bottle and let it go allowing it to expand.  What do you see?


You should be able to see a cloud in the bottle.  If you squeeze the bottle again it will disappear and then when you let it go your cloud will reappear. MAGIC!


Why do we use the match?


It’s because water molecules find it hard to condense in clean air, they need something to cling on to so in this experiment we gave it smoke!


Real clouds do the same sort of thing however they cling to things like: dust, pollen and pollution.  Fog works in the same way too.


Did you know that an average cloud is made up of billions of water droplets? 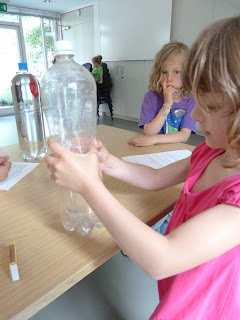 A storm cloud can weigh as much as 24 millon Rhinoceros’ (that’s what Chiara read out to me in her national geographic magazine the other day!)
Posted by Lisa Gwinnell at Monday, July 09, 2012