HOW DO SUBMARINES WORK?

Ever wonder how a submarine works?  Well this is a really fun and easy way to learn a bit about it. 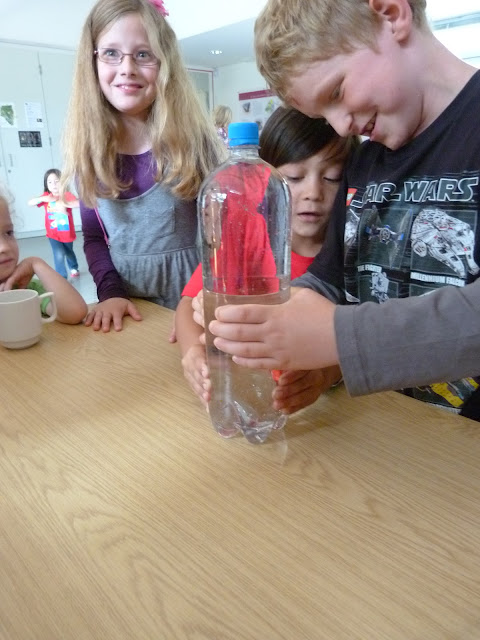 Chiara got her one free from the sandwich shop round the corner.  Anyhow, what you’ll need to do this experiment...


A sachet of Ketchup ( do not open the sachet) -

it doesn’t need to be TK it could be brown sauce, salad cream or anything that you can get in those little sachets from a takeaway.
Possibly some paper clips 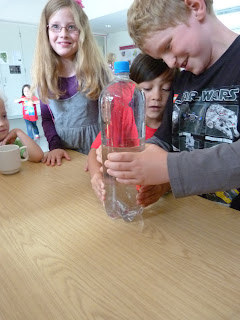 Take the bottle and fill it to the top with water, ensure that you have filled it right to the top.

Put the unopened sachet of ketchup into the bottle of water.

Put the cap back on and be sure to screw it on tight.

You should see that the sachet sinks to the bottom of the bottle.

How does it work?
Thanks to Archimedes (that famous Greek guy who ran out of his bath screaming Eureka!) who discovered how things float we can understand this experiment for ourselves.  Archimedes discovered that water pushes out of the way.  If the displaced water is heavier than the water itself it will then float upwards.


When we put the sachet is first in the water it floats – this is because it is displacing an amount of water that weighs slightly more than it does.  Putting this in science terms the density of the water is more than the sachet at this point.
When we squeeze the bottle of water it is incompressible so instead the pressure is put on the little sachet.
Inside the sachet is not only sauce (a liquid) there is also nitrogen (a gas).
Unlike liquids gases can be compressed and when the gas inside the sachet is compressed the water it displaces changes and weighs less that the sachet (it's mass changes), this is what causes the sachet to then sink.  Again in science terms the sachets density increases so becomes more dense than the water causing it to sink.
So why does it float back to the top?
This is because once the pressure has been taken away the gas is able to expand back to it’s original state!  How cool is that?
* Density is weight per cubic volume.  For example water is about 1g cm3 (1 gram per cubic centimetre)
Scuba divers and submarines both use this principle.
You can play with this experiment a bit by adding salt to the water.  Salt makes water denser so how do you think this will affect the sachet?
Posted by Lisa Gwinnell at Friday, July 13, 2012