Yes, it was another day in.  At least it was a miserable rainy, haily sleety SNOWY (I still can't believe we had snow at this time of the year!) day.  Honi does appear to be better, so today we are going out, even if it is just to the coffee.

So how did yesterday go?  They played in the sink...

Then they complained about the lack of water and how wet their clothes were getting so I threw them in the bath until the bathroom was so wet I had had enough and the water was so cold they had had enough.

While they were in the bath I built this with Chiara... 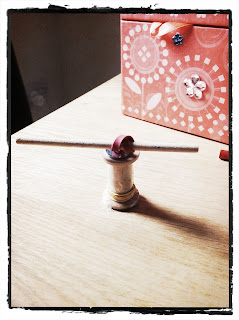 We tried out a few new French Apps for children and we're trying to figure out which works best for us.  There are quite a few that are free to try at the moment on my iPad.  It was lovely seeing even Harmonie joining in.
Honi, in between all the lovely moments, was super irritable but not as bad as the day before.  She managed to sit though the film Bedtime Stories which amused her greatly!  As did it all of us.  How Russell Brand made them laugh!

Tension rose being that they were in all day by dinnertime.  Not even art helped us through.  Harmonie was super whingy too with a snotty nose.  There is no warning with her there is just a very long and very loud: NEED A TISSSSSUUUUEEEE!  Repeated and repeated until she has a tissue.  Still she is giving out extra cuddles at the moment.  In fact, I woke this morning to cuddles with my baby girl and her whispering to me: loves you.  Heart melting moments!

Well we're off to get ready for the birthday girl this weekend.  Harmonie will be turning 3 on Sunday.  What a wonderful 3 years they have been!  She wants a bike for main present, an iPad (in her dreams!), a ride on a train and too see animals.  I have a plan and she may get nearly everything she's wishing for.  It's so much easier to please them when they are small!