We got very practical today.  I'm doing about potential and kinetic energy on Monday so decided to work on a new project.  Chain reaction lolly pop sticks!  It's all over the web and such a fun way to experiment with potential energy!
My 10 and 8 year old were majorly into this working very independently at one point but my 5 year old was interested too and I think it is something I will do with her when we are alone so she doesn't get bossed about and frustrated by her older 2 sisters.  I think it was the way that it explodes at the end that entertains her so much, it certainly entertained me!

All you need is a large pack of fat lolly pop sticks  (tongue depressors work well too).  It's a tad fiddly to start with but once you've started it's really easy to keep the weave going and I left my big 3 to it for hours!

First make sure you have a sensible adult with you and some eye protection is a good idea too, goggles or glasses.  Now get 4 of your lolly pop sticks, we had different coloured sticks and this really helped at first, you could put coloured dots on instead to help.

We start with a red stick and cross a yellow one over like this so it is about a third over: 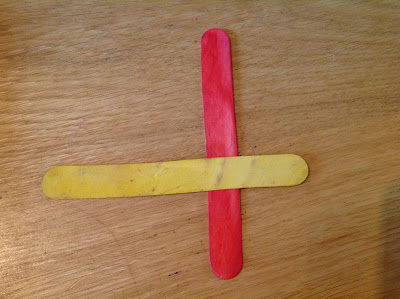 Then you cross a purple one under the red one about a third over like this: 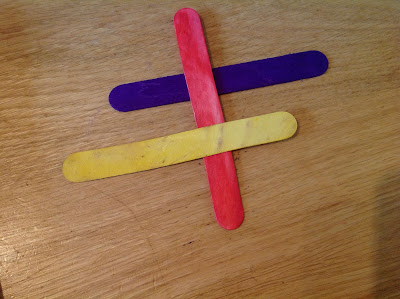 Now to stop your chain reaction from reacting at both ends we put a cap on it before we go any further.  We do this by getting a fourth lolly pop sticks , we chose a blue one, and thread it under the red, over the yellow and under the purple like this: 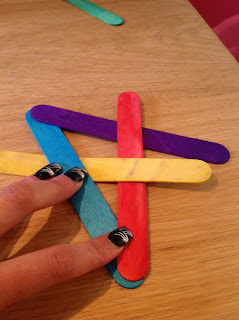 NOW IT IS REALLY IMPORTANT NOT TO LET GO OF IT AS YOU WILL START THE REACTION!


Now you take a fifth lolly pop stick, we used a green one.  Place it on your yellow one like in the picture and then... 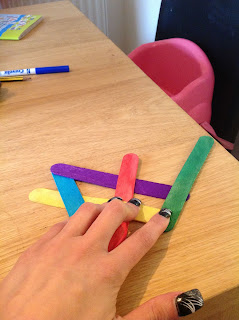 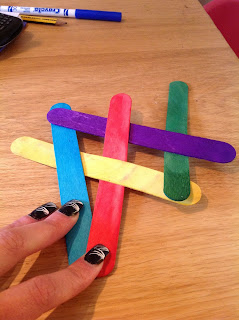 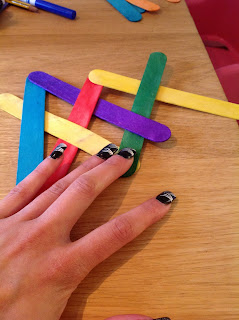 Keep going with this weaving pattern for as long as you can or until you run out of lolly pop sticks ...

Then let go.  If you want to see how ours went click here which is a link to our YouTube video.

How and why does it works?


This is a great example of potential energy and how it is turned into kinetic energy.  It works because of the elasticity in the wood.  We all know about elasticity, we have all played about with elastic bands.  You stretch the elastic band, let it go (very carefully) and it will return to its original shape.


You will notice if you bend your lolly pop sticks it will bend, not as much as an rubber band but it will bend - this is the elasticity in the wood.
In physics, elasticity is a physical property of materials which return to their original shape after they are deformed.
Wood is elastic because, as I am sure you all know, it comes from trees and we know trees have elastic properties as when they bend in the wind or when we pull at them they always return to their original shape.  It is because of this elasticity we can store potential energy in the sticks using this method which holds each stick slightly bent ready to release its energy - you can see what I mean if you get one of your sticks and bend it in your hand then let it go it will jump. Of course if you over stretch or over bend something with elastic properties you will take it to the point of failure.  You would take it to the point where it won't return to its original shape, like when you over stretch a spring or it snaps and breaks like if you bend your lolly pop stick too far it will snap!
This reaction works because of all of these factors. When you release the chain the first stick returns to their original shape, the energy stored in the stick is released turns into kinetic energy and propels it in the air.  The next stick in the sequence is released, releasing its energy and propelling that one in the air and this happens to the next stick and the next stick and the next until the end of the chain!  This works in the same way as a domino effect.
Unlike the domino effect though our lolly pop sticks fly in the air!  This is because of the elasticity I've already mentioned.  Like an elastic band pings they are catapulted in the air in a similar way, not as much as rubber, but still because of its elasticity.

So what are we learning?