Science: Why does the sky turn red experiment!

Why is the sky blue and why does the sky turn red?
This is an experiment I did with my 9 year old yesterday, one we have done before but I haven't yet posted about on An Ordinary Life.  It is one of those questions every child asks I think and there is a very easy experiment you can do to demonstrate why this happens. 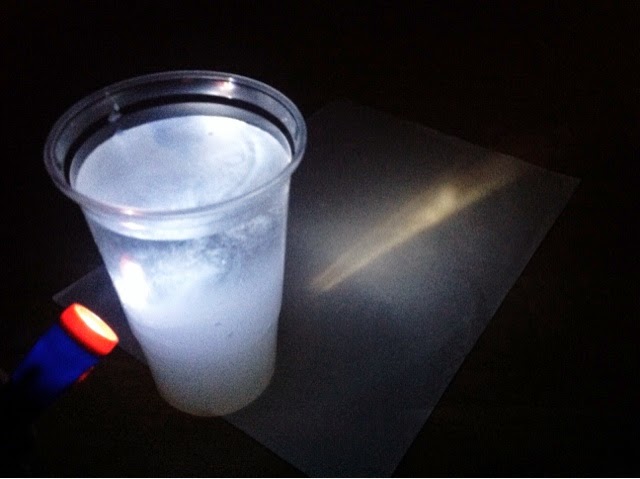 I am going to take you through my version of this simple experiment to explain why...


All you will need is:
STEP ONE

First fill a straight clear glass (a plastic cup will do as an alternative) with cold water.

Shine your torch through the water until it shines a light on your paper.  What colour is it? A blue colour?

Put a teaspoon of milk into the water.

Shine a torch through the liquid. You may have to try shining your torch at different angles.

What colour do you have now, orangey red?

Add another teaspoon of milk and repeat STEP FOUR.
What happened now? The light is redder?

If you like you can repeat STEP FIVE and STEP FOUR another 2 or 3 times.

Here are some extra ideas you want to be really scientific about it or take this project further:

It's all about light splitting like when we see a rainbow in the sky, but the milk molecules scatters the light in different directions so instead we see a red light.  This is the same reason that we see red at night in the sky: as the sun lowers the angle of light changes and the sky turns red.

You should find that the more milk you add the redder the light becomes.


In this experiment, the torch represents the sun. The light from the torch is a combination of all wavelengths of the visible spectrum, the colours of the rainbow: red, orange, yellow, green, blue, indigo, and violet.


As you shine the torch through the milky water, the light collides with and bounces off of the many molecules from the milk (the protein and fat droplets) - this simulates what happens in the air; the molecules simulate the various gases and dust that makes up the atmosphere.
These molecules scatter the light, and the light waves with the shortest wavelengths are scattered the most.
I recently read that blue light is scattered ten times more than red light in all directions.
The red light, having the longer wavelengths continues to travel largely in its original direction. Therefore, the blue sky we see is the result of the scattered blue light waves.
It is because the orange and red light is scattered less, more orange and red light travels in a straight line from the torch. When you look directly into the beam of the torch, it looks orange or red.
What does this experiment have to do with blue sky and orange sunsets?