How To Make A No Heat Needed Lava Lamp! 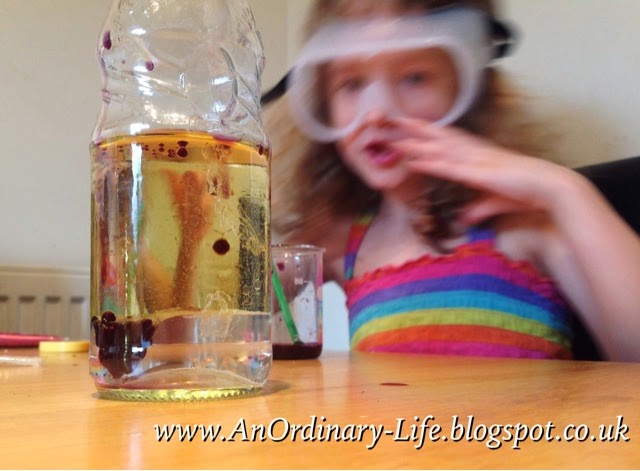 A great experiment to try for all the family and teaches us about some interesting science too!
You will need:

STEP ONE
Fill your bottle with about 4cm high of water.
STEP TWO
Using your funnel pour in 100ml of oil
STEP THREE
Add 10 drops of food colouring to your bottle.  This part is fun to watch!  You can read more about it later in this post.
STEP FOUR
Now for the exciting part!

Add quarter or half a fizzing tablet to bottle.

So what is happening?

When we add the oil we don't have to worry about the oil and the water mixing because they won't.

Why? Because oil is hydrophobic, which means that it hates water.  To explain it simply: All the tiny oil particles are so scared of the water they keep moving away from the water molecules and that's why they don't mix.

The reason that the oil sits on the top rather than underneath is simply that water is denser (Density means has more mass/weighs more per cm squared) than oil does.

You would have also noticed that when we add the droplets of food colouring, they fall slowly through the oil and then sit at the bottom of the oil for a time before exploding.  This is because the oil coats the drops of food colouring and it's not until the wall of oil is broken through that the food colouring escapes and mixes with the water underneath making it a pretty colour!

When we added the fizzy tablet, you will notice that it didn't react until it reached the water.  This is because it is the chemical reaction between the tablet and the water that creates the fizz; it forms a gas called carbon dioxide.

When these bubbles filled with gas and coloured water reach the surface of the oil they pop, releasing the gas into the air and causing the water to fall back down again to the bottom!  Thus, giving an effect like the lava lamps.