This is a great way of teaching children multiplication, what it is and how it works in a very hands on, kinaesthetic way. When Honi is learning a new thing she gets ever so frustrated.  She is also extremely fidgety so... 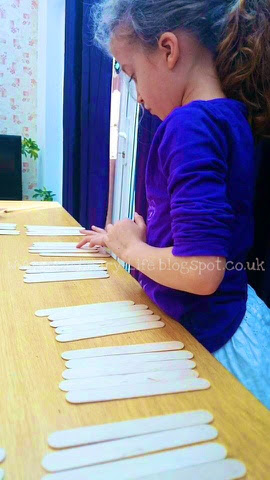 Out came the Lolly sticks!!!!

I used them to show how when we do multiplications, our times tables, we are looking at groups of numbers.


If you are a regular reader you will know I am often using kinaesthetic, hands on methods to teach my girls.  We often use buttons, conkers and anything else we can get our hands on but I thought, with Christmas coming soon, lolly sticks would be fun...


I came up with this idea when she got to a times table question in her book the other day, she had a melt down at the thought of them.  I tried to explain but she hates just listening - her concentration span can't cope!  So instead, I gave her a load of giant lolly pop sticks and showed her in a more tactile way - we played with maths!


When we had to times things by four we made boxes and called them presents and when we times by three we made triangles. I said we could pretend the triangles were Christmas trees due to the time of the year.

For example, this one... 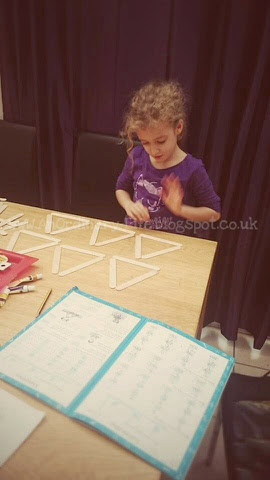 we had 6 lots of triangles made of three sticks: six lots of three.  I tried to encourage her to count in threes: 3, 6, 9 rather than 1,2,3... However, when she got stuck I said nothing when she counted them individually as the most important part of this activity was to keep it fun!

When we did boxes we counted in four, and said they were presents - again I then encouraged her to count in fours.  With the larger numbers, 5 times tables, 6 times tables and higher, she preferred to make piles of sticks, but the idea stayed the same.

After a few multiplications she threw her arms round me and said: 'Thank you mum!  This way is easy!  I get it now!'

I also use this method for division.  For example: if there are 36 balls and 6 boxes, how many balls would you have in each box if you divided them equally?


We counted out the big number - 36 in the case of the above problem to solve - and then made piles of six - counting them into the boxes.  Then all that was left was to count what was in one of the 'boxes'  so to speak.

A few months ago she had got the idea of times tables and was using her hands and even remembering a few.  Kids often go back and forth when they are learning so I said nothing.  This time she caught on quicker than ever as she was re-remembering, but making it into a game took away the stress for her; the fact that she had something to play with as she learnt something new reduced the stress and allowed her to listen to what I was saying.