Science: Make your own Whirlpool tube!

This is a wonderful visual demonstration of how centripetal force works.  First lets make our Whirlpool tube! 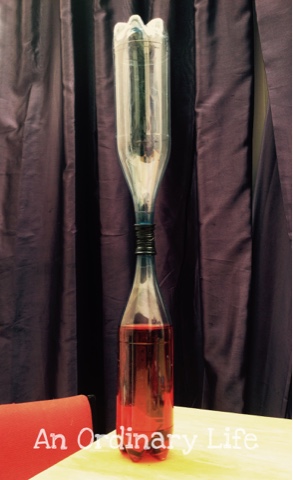 
Here's how to make your whirlpool tube!

Fill one of your bottles, 3 quarters full.

Add food colouring and glitter to your bottle.

Wipe round the rim of your bottle to ensure that it is completely dry.  When you are sure, get some sticky tack and roll it in the shape of a small worm then place it on the rim.  This will help keep the bottles in place and reduce leakages.

Put your empty bottle on top of the filled bottle, holding it together slightly with the sticky tack.  Then, using your electrical tape, wrap it round the necks of the bottles like this... 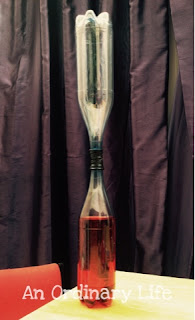 
Get a stopwatch and just turn the bottle over.  How long does it take for the water to pass all the way into the other bottle?


Now try again.  This time, spin the top of your bottle so it makes a whirl pool...


It should take half the time.  Do you know why it's quicker?


When we spin the top bottle however, this creates a centripetal force, a force which then produces a vortex!


A centripetal force is the force that acts upon a gas or liquid that's moving in circles - along a curved path - that's directed towards the centre of the curvature of the path and forces the liquid or gas to stick to the curved path.


When the centripetal force is put on the water, it creates two pathways in the whirlpool tube: one for the water, and through the centre of the vortex, a path for the air.  They are no longer fighting against each other which is what makes the switch quicker!

What else can you do?  If you add some washing up liquid to the water in the first bottle, at STEP TWO, put on the lid firmly and give it a shake to create bubbles this will increase the effect.  I did this for Science Crazy's Summer club and it was a huge hit!