Chemicals that are acids or alkalies can be very difficult to tell apart just by looking at them so to be able to tell them apart scientist use something called indicators, the most famous being litmus paper.   Litmus is a natural dye made from small plants called, lichens.  In this experiment we don't use lichen, we use red cabbage as there are other plants and vegetables that contain pigment that work in the same way.

Yesterday evening Chiara decided it was time to do this experiment.  She enlisted her sister Naomi to help with the grating and all by herself did this experiment and had a lot of fun.  Anyway for those of you who want to try this here is how to do it.

First you will need about quarter of a red cabbage  - you may want more it depends on how many things you want to test, but quarter of a cabbage does do plenty.

Grate the cabbage with a grater, or cut very thinly with a knife. 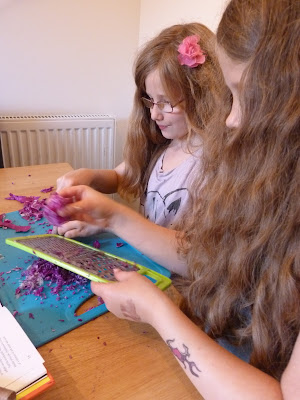 Put it in a mixing bowl and put some hot water over the cabbage until it's covered then crush the cabbage with a wooden spoon until the liquid turns a deep purple colour.

When it's about right use a sieve to separate the juice from the cabbage.  This is your indicator test fluid.  The purple colour is our neutral colour - 'control'. 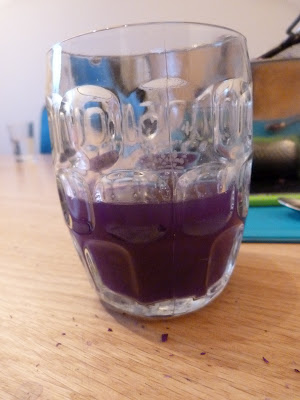 Now you're ready to test some substances.  pour a little of the juice into a couple of glasses and  then try adding a teaspoon of vinegar or lemon to one glass and in another a teaspoon of bicarbonate of soda or baking powder. 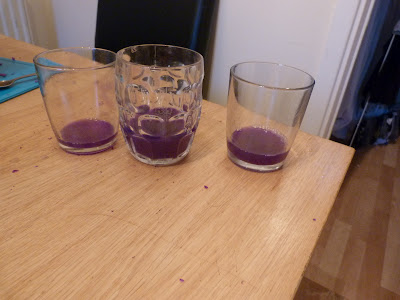 Swirl the cup to make sure it's properly mixed then check out what happened.  The glass with the vinegar or lemon will go pink or even red depending on how acidic the substance you added was.  The glass you added bicarbonate of soda or baking powder should turn it to a dark blue colour.


It was a person called Robert Boyle from the 17th Century who discovered this and invented the litmus test.  I read somewhere that he also coined the terms acid and alkali!  Red cabbage contains a water soluble pigment called flavin part of a group of chemicals named anthocyanins.  The reason I found this experiment so interesting is not just because it's fun to make things change colour like magic but because light is involved!  Anthocyanins are large molecules consisting of several linked rings of atoms that share their electrons.  These electrons absorb certain wavelengths and reflect others which is what gives the chemical it's colour.

So what makes it change colour?


Well when you add an acid like vinegar or lemon for instance you add more hydrogen to the oxygen atoms in the anthocyanin molecule.  What this does is stops the electrons from being shared about which makes them soak up more blue light and because, as we know from my previous post Splitting Light, white light is a mixture of different colour light (wavelengths) ranging from red to blue.  So when the blue light was soaked up more of the red light was reflected.

When you add an alkali like baking powder does the opposite of acids and tries to remove hydrogen from the liquid, to make up this loss of hydrogen the anthocyanin tries to compensate for this by sharing more of it's electrons around the molecule, this makes it absorb more red light, reflecting out a blue light, hence the liquid looks blue.

The solution may be used to manufacture homemade pH strips. Just boil the liquid until it has reduced in volume by about 3/4 and soak a coffee filter in the resulting concentrate. Let the filter dry, then cut it into strips.

Warning! Boiling water, acids, and bases are all potentially dangerous.  For safety you may want to wear gloves and safety goggles when working with acidic or basic compounds,

Interesting fact:  Most of the colours that you see in nature are a reaction like the one in this test.  For example the red rose is red because it is a more acidic plant and the blue of the violet is because of the alkali in the plant.  Cool stuff hey!