Honi has wanted to do some science with her goggles on and using test tubes and pipettes, all by herself for a few weeks now.  She managed to make me promise her I would make it happen, so I had a think and came up with this experiment which teaches about emulsifiers... 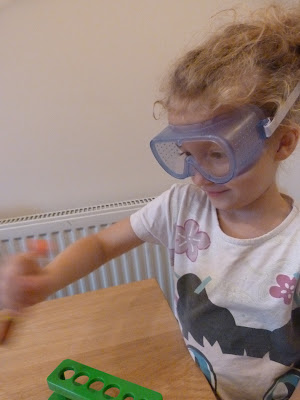 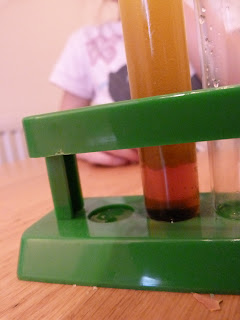 Why do you think the two liquids don't mix?

Why do you think the oil is on top of the vinegar?


You might think it has to do with the density of each of the liquids...  If you were wondering this you might like to know that oil has a density of 1g/ml and the density of vinegar is 1.01.  Although it's close oil is still less dense than the vinegar which is why you can see the oil floating on top of the vinegar.

Give it a shake!  Make sure the lid is on tight first!

It does mix for a very short time but it soon goes back to it's original state of the two layers!  Why?  Well...

It's not to do with the density of the liquids.  The reason they don't mix is because of their different compositions: vinegar is 95% water with just a small amount of acetic acid and a few other compounds, whereas oil is made up of fats called lipids.

It's all about the polarity between the water in the vinegar and the lipids in the oil.  Water molecules have a positive and negative charged end, like a magnet has a north and a south pole.  When you have a molecule like this they are called polar molecules and easily bond with each other.  Lipids are non-polar, this means that the water is more attracted to itself than with the oil molecules. 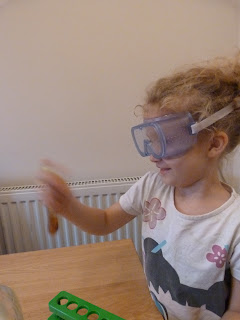 So what will happen when we add some egg yolk?
Time for a hypothesis - this means to take a guess at what you think will happen.
We used a pipette to add the egg yolk at this stage to add to the fun!  What actually happened.  The oil and the vinegar mixed and remained mixed!  Was your hypothesis right? 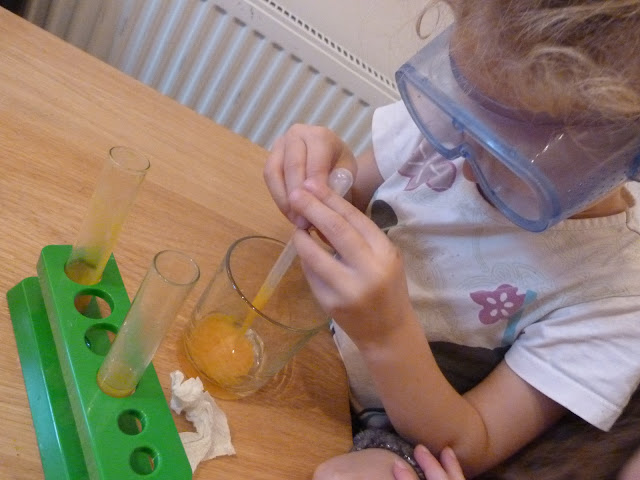 I just let Honi have some fun squirting the yolk into the test tube using the pipette.  She loved it and felt like a proper little scientist.  We did two experiments here in one test tube we had vinegar, oil and added the yolk and in the other we had vinegar, oil and washing up liquid.  It was interesting to find which one was the better emulsifier.
There are other ways you can make oil and vinegar combine. You could add some washing up liquid - this combines the water and oil to combine and remove it off your skin of the dirty dishes; this is because, like egg yolk, soap is an emulsifier.


The emulsifier contains compounds that surround the non-polar molecules (the oil) and allows them to bond with the water.  The same thing happens with the vinegar and oil but another emulsifier is egg yolk, which is much tastier.  This is the science of how mayonnaise is made.
So we made our own emulsion and HB loved being a real scientist!
Posted by Lisa Gwinnell at Monday, October 08, 2012