I had such a rough night last night.  I had only been asleep for an hour when Harmonie came in.  Now I love when my baby Harmonie comes in for cuddles normally but she was so, so restless I struggled to sleep next to her.  A little while later, Honi came to join us and there just wasn't enough room.  I was only able to sleep lightly as I held on the Honi to stop her from falling off the bed.  Then - yes there is more  - one of the local tom cats came in the house causing trouble.  One of the cats must have passed wind as I thought it had messed in the house but when I went downstairs if ran out of the cat flap and there was no mess to clear.  Honi decided it was probably best to be in her own bed and Harmonie settled a bit more. 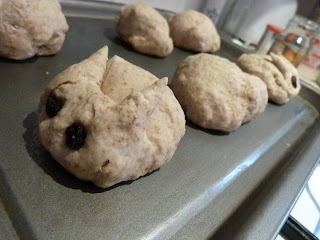 Then at 8 O'clock this morning it all kicked off.  the two H's fought over everything!  I escaped to Honi's bed to avoid all the noise as they have invaded Mummy and Daddy's room.  I have to say I feel rather achy from last night's shenanigans!

I took forever to get downstairs.  Honi ran up with a parcel I had been waiting for all last week pH strips and this was good motivation.  When I had finally come down, I found that the girls had been having a great time without me.  Chiara had made banana milkshake from the fresh bananas and was asking for box.  I still have no idea what she's wanting it for - a surprise apparently!
Honi has stolen the box now so I will have to find her a new box!  Honi is in a foul mood today, most likely on account that she has less sleep than normal.  To be honest in between the lovely moments there has been the I-want-to-tear-my-hair-out moments.  Mind you she's had her bunny bread (which looks more like mouse bread) and is now calmly making herself a cardboard car.

Naomi started writing a new story this morning and Chiara sat with her writing her story that she's finishing off from last week.  That is one of the many things I love about home ed, is when they are in creative flow, whether it be art and crafts or writing stories they don't have the frustration of having to stop.  If they want to they can go on for hours writing their stories and sometimes that's exactly what they want to do some days, today is one of those days.

I prepared the bread yesterday with Naomi and it is cooking in the oven as I write this.  There is nothing better than homemade bread and the girls love baking it too.  I tried making it into bunny bread, however it looked more like mouse bread.  The girls liked it and, I suppose, that is all that really matters.
Who knows what the rest of the day holds but all seems to have calmed down since lunchtime and a bit of Fun. so I have a feeling it will be good whatever we manage to get up to!  And no, we haven't managed to play with the pH strips yet...