So my girls are back.  They went to see a Cinderella play with their Nan and went swimming.  They ate lots of sweets not normally allowed but that's what Nana's and Grandad's are for.  I heard about hot chocolates and fish and chips.  They got to bed at midnight too.    I am so pleased that my girls have my husband's parents.  I never really had grandparents.  My mum had her Dad, my Grandad, until I was 9 but I had few memories of him, they didn't get on or something like that.  The girls are experiencing things I never had and do you know what?  This fills my heart with joy that I can not put in to words.
So my little two have been thrilled to have their big sisters back.  They have been annoying them left right and centre.  Of course there has been all that extra giggling - Harmonie finds her big sister's hilarious.
Honi has gone science mad.  All she goes on about is which science experiment she wants to do next, whether it is making something with her new lego kit with gears and pullies or it's a chemistry experiment.  She sent me to the shops to buy food-colouring, oil and a 2 litre clear bottle of something (we went with a bottle of water).  All this because she's been looking for science experiments via the web.  Love it!

We came home from the shops and the first thing we done, before I was even allowed to put the dinner on was... 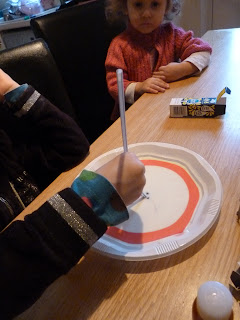 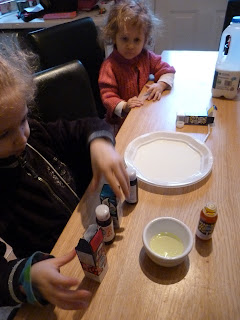 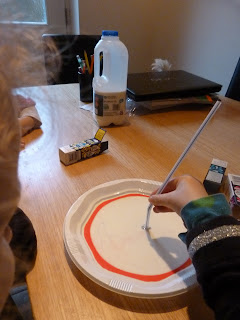 Last night she wanted to try something with eggs, so I suggested the bouncy egg experiment.  It's one I did years ago with Chiara and Naomi and one that had been brought back to the forefront of my mind by a good friend of mine who also home educates her children.  It's a fab experiment, especially for someone who is as independant as my Honi.  All you do is put the a fresh egg in white vinegar so that it is completely covered and then leave it for 24 to 48 hours. 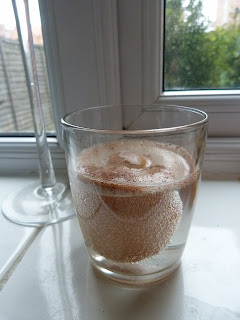 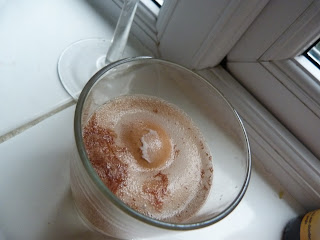 Honi loved watching the bubbles on the egg.  At first when she was doing the experiment she said "now we put it in water."  I told her that water won't dissolve the shell, that we needed acid.  "Oh, yes!"  She said, "I forgot.  We need vinegar."
She is so proud of her egg in vinegar that is sitting on the kitchen window sill.  She'll love it even more when she gets to bounce it.

This morning has been our usual lazy Sunday Morning.  The girls wrecked the house by the time we came downstairs - it looked like we'd been burgled!  We hadn't though and it was soon cleared up and crumpets with butter served up and a strong coffee for me.

We checked on Honi's egg and she was delighted that she could rub the brown of the shell off by just gently rubbing it with her finger.  Now for a wander round town...
Posted by Lisa Gwinnell at Sunday, February 24, 2013