SCIENCE - Make your own Thaumatrope toy!


Have you ever seen this Victorian toy? 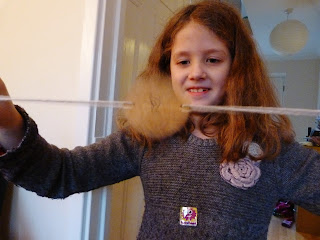 It’s a Thaumatrope and it makes for a great science toy as it teaches us about persistence of vision.


What is persistence of vision?


Persistence of vision is actually a phenomenon.  It is a phenomenon of the eye to be precise. An after image will persist for approximately one 25th of a second which means that we see the after image with the image that is there and they blend together.  Persistence of visions is what enables humans to view a long sequence of images as animation.

Phenomenon  - A phenomenon is defined as a remarkable thing, something that we observe happening but are left with that question, how?


FACTS ABOUT THE THAUMATROPE


Thaumatropes were invented in the 1820’s


The Thaumatrope were designed to amuse children, as a toy!


The most common Thaumatrope I have seen so far is the bird in the cage but there are many more.


We made two types of Thaumatrope, if you want to know how to make one here are some step by step instructions...


Thaumatrope on a stick!


What you will need is:

How to make your Thaumatrope on a stick:


First you need to draw, either on a piece of paper or card, round something like a plastic cup to get a circle with about a 6cm to 8cm diameter.  Make two of these and cut them out carefully.
Then you need an idea.  We did a butterfly and a flower.  On one side we put a butterfly on the left of the circle and on the other circle we put a flower on right side.  If you make a dog in a cage you can draw the dog and the cage central but remember to draw the dog (or any animal you wish) smaller than cage.  There are many other variants - you can get quite clever with the art side here.
When you’ve got that make sure your lines are clearly draw, not too light.  You might even what to go round in a black pen.  You can colour your pictures in if you like too.
You will need to stick the stick to the back of one of your circles and then, with double-sided sticky tape, stick the two circles together.

BEFORE YOU DO THIS IT IS IMPORTANT TO GET IT LINED UP CORRECTLY –the way to do this is making sure that both pictures are up the same way (not one upside down) and lined up so if the two pictures were on the same page they would be sat next to each other - I really hope my waffle makes sense.


When you have done this it is made.  All you have to do is play – just put the stick in between your hands as if you are praying and then rub your hands together forwards and backwards and you will see the two pictures merge.


You can attach one of these to the homemade simple motor we made a while back and it will work really well.


To make a thaumatrope with string, like in the first picture, you will need:


String – I made it 80cm
Cardboard, like a cereal box


It’s similar but not quite the same.  This time - IT IS VERY IMPORTANT YOU GET THIS RIGHT IN ORDER FOR IT TO WORK - you make the circles of paper or card the same way but this time no stick and when you stick the two circles together this time they have to be upside down.  Like this…

Then punch one hole in the far right edge and one in the far left edge like you can see in the photos above.


You may need a pencil or pen to make a bigger hole if you have a small hole punch like mine.  When that is done take your piece of string and cut it in half so you have 2 pieces of string the same length so in my case each piece was 40cm long.


It will now look like this and is ready to be made. To make it work twist the string at both ends and it will spin the paper/cardboard so you will see the images blend like with the stick Thaumatrope.
Posted by Lisa Gwinnell at Monday, February 04, 2013