I was surprised this afternoon when my little Honi, 5 years old and only just got into writing more than one word, insisted on having a science experiment notebook like her two big sisters.  I said I'd need to buy her a new exercise book as I didn't have any left.  She insisted I was wrong though and ran out of the room and came back with her new sketch book I bought her last week.
But I thought you wanted that so you could draw pictures and make notes when we go to the museum.  Suddenly she fell silent, only for a few seconds but that is unusual for my Honi, with a very serious look on her face.  I suggested I buy her another one when we go out next and she switched back in to my bubbly bouncy Honi and got on with it.
Now I didn't want to lose any of this enthusiasm she had for writing up her science experiments so I thought for a moment and then came up with this idea which worked really, really well... 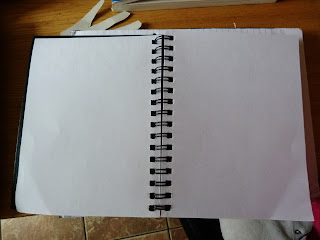 Her book was blank, a sketch pad really, so I added just a few lines she was happy to write the date and the hypothesis question.  The twist though was than instead of writing her hypothesis, she drew her hypothesis.  then beneath I wrote were you right? and all she had to put was yes or no.  The rest of the experiment we discussed out loud. 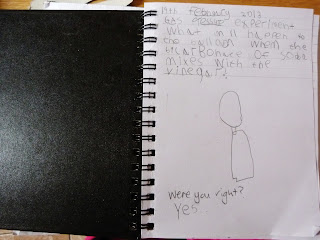 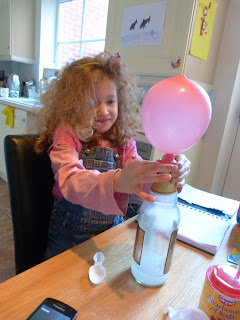 This really worked for us so I thought I would share it on here in case anyone else likes the idea to.