All you need is fizzy water, a tall glass, raisins and, if you would like to try something else too, some beans. 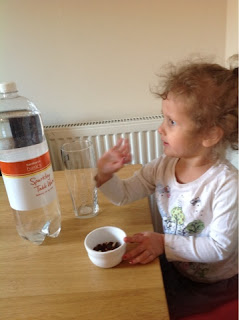 Pour your sparkling water into your tall glass like this.  It has to be a clear glass so you can observe what is going on.  Looks a the bubbles created first.  These bubbles are full of the gas carbondioxide (CO2).

Then one at a time (or like my 2 year old, by the handful) add your raisins and beans.


They float and then sink and then float again - they dance!  You can try this with other things as well like peanuts and cornflakes.  Try it out and see what works and what doesn't.  That's what science is all about after all!

Well raisins (and the beans) are denser that the sparkling water so they will sink that is until the carbondioxde bubbles cling to the raisins and then that makes the raisins buoyant.  This is because the carbondioxide have increased its volume (area including raisin and bubbles) but decreased its mass (made it lighter per square mm) This changes the density of the raisin making it less dense the that liquid now.


This is why the raisins then float to the surface of the water where the bubbles pop and the raisin then loses it's buoyancy and sinks again.  This continues until the sparkling water runs out of fizz or until the raisins get too soggy to float!  This is another experiment that is an example of Archimedes' Principe: Buoyancy is the phenomenon (discovered by Archimedes) that an object less dense than a fluid will float in the fluid. More generally, Archimedes' principle states that a fluid will exert an upward force on an object immersed in it equal to the weight of the fluid displaced by the object.