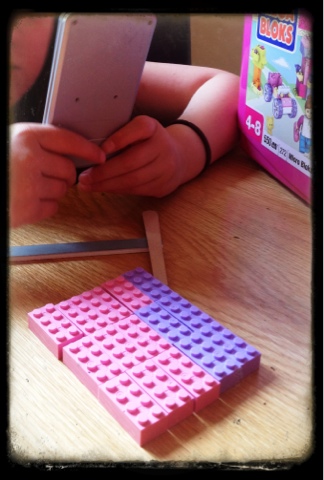 I posted on Facebook that I was doing reverse percentages with Chiara a while back and a few of my Facebook friends said: you can explain it to me when you have her.  I said I would so here is my explanation and I've tried to make it as fun as I can.
So here is a simple example question you might find in your maths books...

A box of chocolate costs £12 we know it was increased by 20% of it's original price.  How much was the box of chocolates originally?
What if the percentage is less that 100% not more? It's pretty much the same really...
Here is another example question you might find in your maths books...
You see a second hand mobile phone in a shop window, it says a phone is £76, 80% of it's original price.  How much was the phone before the reduction?
So...
I hope this helps but if you want to see this in a more visual way you can...


Try this, use either fake pizza (it helps to have more than one pizza) or real pizza or cake if you'd rather.  There are other ways too, you could use lego or bricks of another kind too. It just helps to use something physical, I certainly find with my 8 year old, to understand the concept of it all.

This is what we did.  We used lego in the end as Honi couldn't bare to chop up her fake pizza, it was more a lesson for Naomi and Chiara anyway so I chose to do it with lego.  I picked out 15 pieces of lego and layed them out like this...

You can show then the orignal amount of blocks left, when halved 50:50, is the same as the 50% left therefore we know we are right. 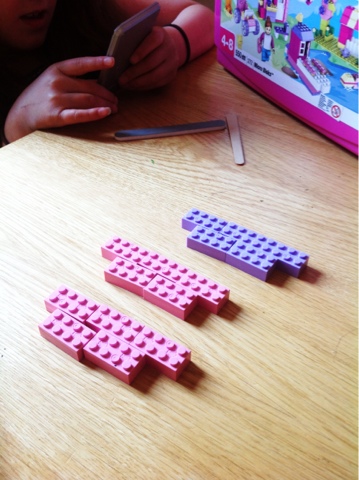 This helped in grasping the idea for Naomi in particular, probably because she is such a visual learner, but Chiara enjoyed it too.  So much, infact, that she had several different goes with the lego and different reverse percentages exercises before we moved on today.
Posted by Lisa Gwinnell at Thursday, May 02, 2013