We've been to London!.

I astounded myself yesterday morning and jumped out of bed at 7am.  Now I know to all you hardcore mum's out there you laugh but this is 2 hours earlier than usual and there was no slowness to me getting myself all ready and out!


Everything went quite smoothly we were meeting a long-time blogging friend, Katie Pybus and her children at the princess memorial playground.  Unfortunately we got rather lost and landed at the princess Diana Memorial fountain, which although it is a lovely place, it is also a good 20-30 minute stomp away.
The girls were really good about it and that didn't stop them from racing around with their pen pal friend that they had met for the first time and her 2 brothers.  Such a lovely family and we really did have such a lovely time. 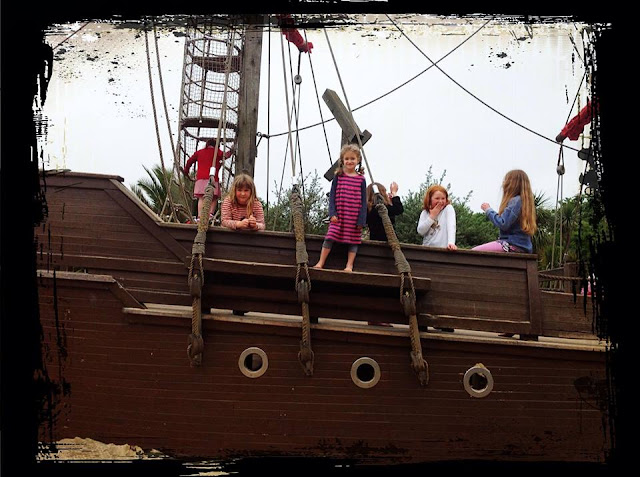 The Princess Diana Playground was immensely cool!  If you haven't been there before, yesterday was our first time, it is all based on Peter pan there are: wigwams in the Princess Tiger Lily area; a little area for the Lost boys and their homes; Captain Hook's ship (which was incredible); the crocodile and a musical area for the children.  It is the most amazing children play area I have EVER seen!  I want to go back everyday.  Unfortunately not possible but I can't imagine it would ever run out of it's magic!

You jump on these and it rings some lovely gentle bells!

We briefly went to the Science Museum too.  Katie took us to The Garden.  Harmonie and Honi loved it.  It is supposed to be for 3-6 year olds but they kindly let the older ones in too, albeit reluctantly.  Still something I will do with the younger 2 again when we're in London next.

Honi loved building a dam in the water here, I could hardly tear her away once she got that apron on and hands in the water!

Harmonie fell asleep in the pushchair so unfortunately she missed this bit.  The big girls were slightly deflated when their friend had to head off home.  Fortunately it didn't take them long to cheer up, well we were in the Science Museum after all!
Katie mentioned The Launch Pad on the 3rd floor.  We had such a lot of fun just wandering about last time looking about the place that we never got that far last time.  Brilliant isn't a big enough word.  There was just so much to do and get hands on with.  Circuits to make, magnets to play with, pulleys and levers and, generators, holograms and hydrogen going POP! That is just to name a few.

I dropped £45 in notes when I was at the Launch Pad area!  Fortunately Chiara noticed a man, someone who worked there, pick it up and hand it in.  Just as I ran up to the counter he was handing it in.  That was super lucky!

This was the girls seeing how much water a nappy can hold.  Apparently a whole 3000 times as much as the weight of the nappy itself (so says that man in the photo).  I will have to do some experimenting with nappies soon!
The girls only left the Science museum because their tummies were calling for food we hunted down a McDonald's.  It took a few hours of wandering around looking at all the shops.  How we walked and my feet and legs certainly know about it now!  How I wish I could have been in the pushchair!  We ended up walking all the way to Oxford Street which including the mad amount of walking we did earlier in the day due to taking a wrong direction, I don't like to think how many miles we covered.  All good exercise though and the girls loved seeing London in a different way as did I!
We passed the Disney shop on our way to McDonald's so when we had finished eating we went back.  Harmonie was in heaven!  She loved it all!  There was a magic mirror that they could interact with a wand and giant Princesses...

And a giant Mickey...

She found an Os so Special teddy bear (that I was so tempted to buy but didn't!) and so many other things.  There was so many Ohs and ahs!  We managed walking out of there only spending £5 which I think was quite impressive!

We were home by 10:30pm.  Honi said she was falling asleep on her feet on the walk home from the train.  I don't think I've seen Honi so tired and go to sleep so quickly!  I was very impressed with Honi yesterday, she was such a good girl all day!

So today is an Ipswich Day still a slightly special day for the girls as Daddy is home.  I better get downstairs as we need to get down town soon...
Posted by Lisa Gwinnell at Tuesday, May 21, 2013