In science you will often hear such-and-such is denser than blah-de-blah.  For example water is denser than oil.  It might be worded as water has a higher density but it all means the same thing.

You might be wondering what density is exactly.  If you are read on and I will try my best to explain it in as short and simple a way as possible:

The density of something is how much something weighs per cubic measurement.  For example if your wanting to know the density of a block of wood compared to a brick you would measure their density by how much each cm3 weighs (its mass). 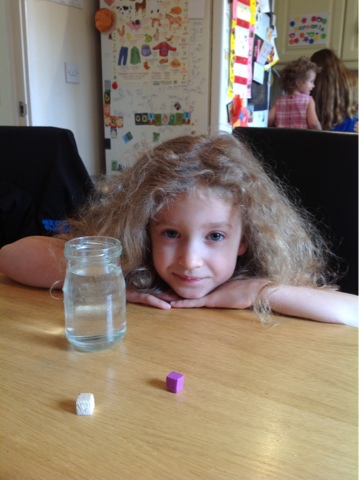 Here is a simple and quick experiment that is a good visual example of this...


All you need is a jar of water, a 1cm cubed block of balsa wood and a 1cm cubed of modelling clay and, this last one is optional as you could always do it yourself, a small person to help.
And this is how to do it...
In the video Honi says the piece of wood is lighter that is correct, but it is also less dense than the plasticine.  We know this because they are both the same volume yet one is heavier than the other.
We also discussed, after making this video, that the water was less dense than the plasticine but more dense that the balsa wood which is why the balsa wood floated. This is also true.
For more experiment go to An Ordinary Life's science page
Posted by Lisa Gwinnell at Thursday, May 09, 2013