How does a kite fly?

HOW DOES A KITE FLY?
As someone runs with a kite, the wind going head-on into the kite causes a lift force on it. This force is perpendicular to the wind, pushing the kite up. At the same time, the force of drag pulls the kite back in the direction that the wind is going and that is what makes your kite take off!
A kite is affected by thrust, drag and by gravity.
Drag is made by wind resistance on the kites surface (the sail and tail) and can also be the caused by turbulence from behind the kite.
Gravity is the downward force that is created by the weight of the kite.
and
Thrust is the power of the wind that creates lift. 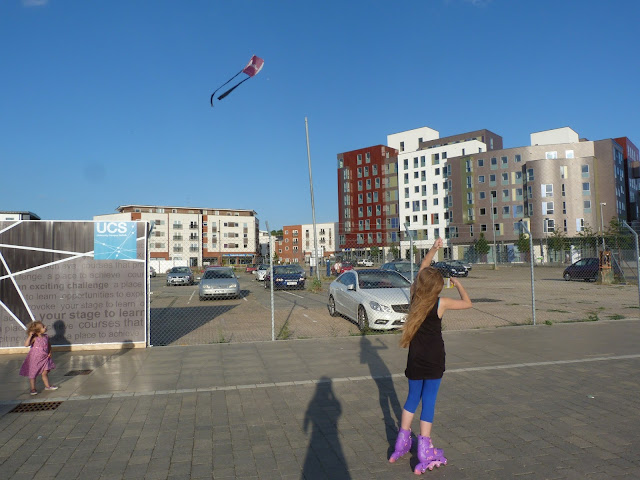 For a kite to fly you need to have...

Enough lift to overcome gravity and drag. Lift, drag, gravity and thrust come together when flying a kite to a central point called the centre of pressure.  The centre of pressure is where we tie the flight string and is called the tow point.
What really interested me and my girls were: what are all the different parts for?  The short answer is they all work together to stabilise the flight of the kite but they all have different functions like for example: the Bridle string is important because where you place it on a kite changes the amount of lift the kite can create.
A word I learnt today was Dihedral.  When I looked up the definition this is what I got:

Aeronautics . the angle at which the right and left wings or the halves of any other horizontal surface of an airplane or the like are inclined upward or downward.
The dihedral angle of a kite's wings is what helps the kite fly smoothly. If the wings lean back at the same angle, then the wind pushes equally on both wings and this is what it needs for a decent flight; a proper dihedral angle built into the kite's design will mean it will fly properly balanced in the sky. Which in science, we call equilibrium.  So it is very important to be carefully and meticulous with measurements and cutting to make it work well!
All things are important to get the balance of the dihedral of your kite right from the tow point of the bridle to how long the tail is will affect the flight of your kite along the vertical axis, lateral axis and longitudinal axis.
The vertical axis is known in aerodynamics as Yaw (to have a motion about its vertical axis).  It is an invisible line that goes from the ground, up through the kite (in this case), into the sky.
When we were out Honi's kite had problems where it was spinning like mad.  I was being asked all sorts of questions that I wasn't sure of the answer too.  When it comes to Yaw problems how can you correct your kite?
The lateral axis is known as pitch.  It is another imaginary line that goes across the wings of the kite.
Like Naomi's kite, if your kite's shape is distorting (if it is changing its shape and/or flapping) this will be the problem:  the bridle is not right, the sticks aren't right or the wind is too strong and the kite needs strengthening.
It can be sorted though, you could try adding more Bridle lines to balance out the wind pressure on a windy day; or you could use stronger sticks.  Naomi's sticks were the problem so we were going to go off to by what we need today to fix it but as it's a rainy day we're making a smaller kite instead so we have spurs (sticks) to fit it.
Then there is roll this is the longitudinal axis on the kite, a line that goes all the way through the kite.  When this isn't in balance the wings will dip, another issue with Honi's kite yesterday.  Things that can be tried to solve this would be to move the tow point further to the front of the kite or add more tail to reduce the pressure on the sails.
Posted by Lisa Gwinnell at Tuesday, July 30, 2013