So I am was looking at ways to study aerodynamics and thought this would be a fun way to start it all off.  Of course we have made parachutes for toys before but what would make the best parachute and why?  And why do parachutes work the way they do?  Well questions like this is what turns it into a science experiment and writing it down involves makes you a mini scientist! 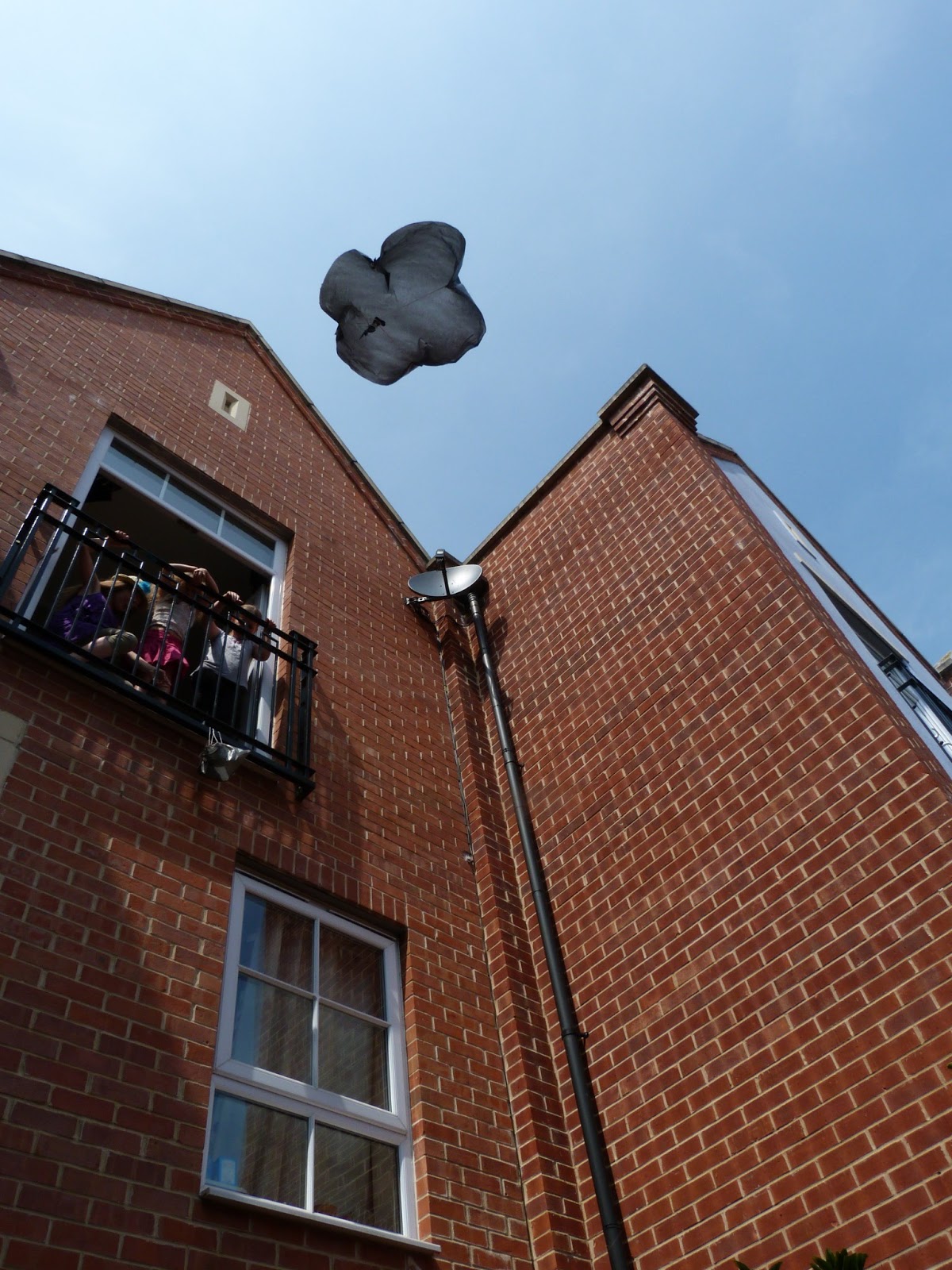 Parachutes seemed to naturally follow on from our recent project: The Gravity Test.  We learnt from this science project a famous story about scientist called Galileo Galilei who is said to have tried dropping two objects from the Leaning Tower of Pisa to find the answer. Surprisingly the two objects hit the ground at almost the same time, a bit like in our gravity test. Gravity works this way on all objects unless wind resistance gets in the way.  So if one of those balls had been attached to a parachute, it would have slowed the ball down.
When someone skydives a person is flown to a very high altitude - this means very, very high up in the sky - The standard sport skydiving altitude is 12,500 feet (which is nearly 2.5 miles) AGL (Above Ground Level).  It is at this point that they jump out and fly though the air before releasing their parachute which helps them to fall safely to the ground by slowing them down.

How does the parachute do this?

TEST ONE: What material is best for a parachute?
What you will need:
So first we made sure each piece of material measured 18cm x 18cm and then we made sure all the string was the same length, 30cm long we decided for this experiment... 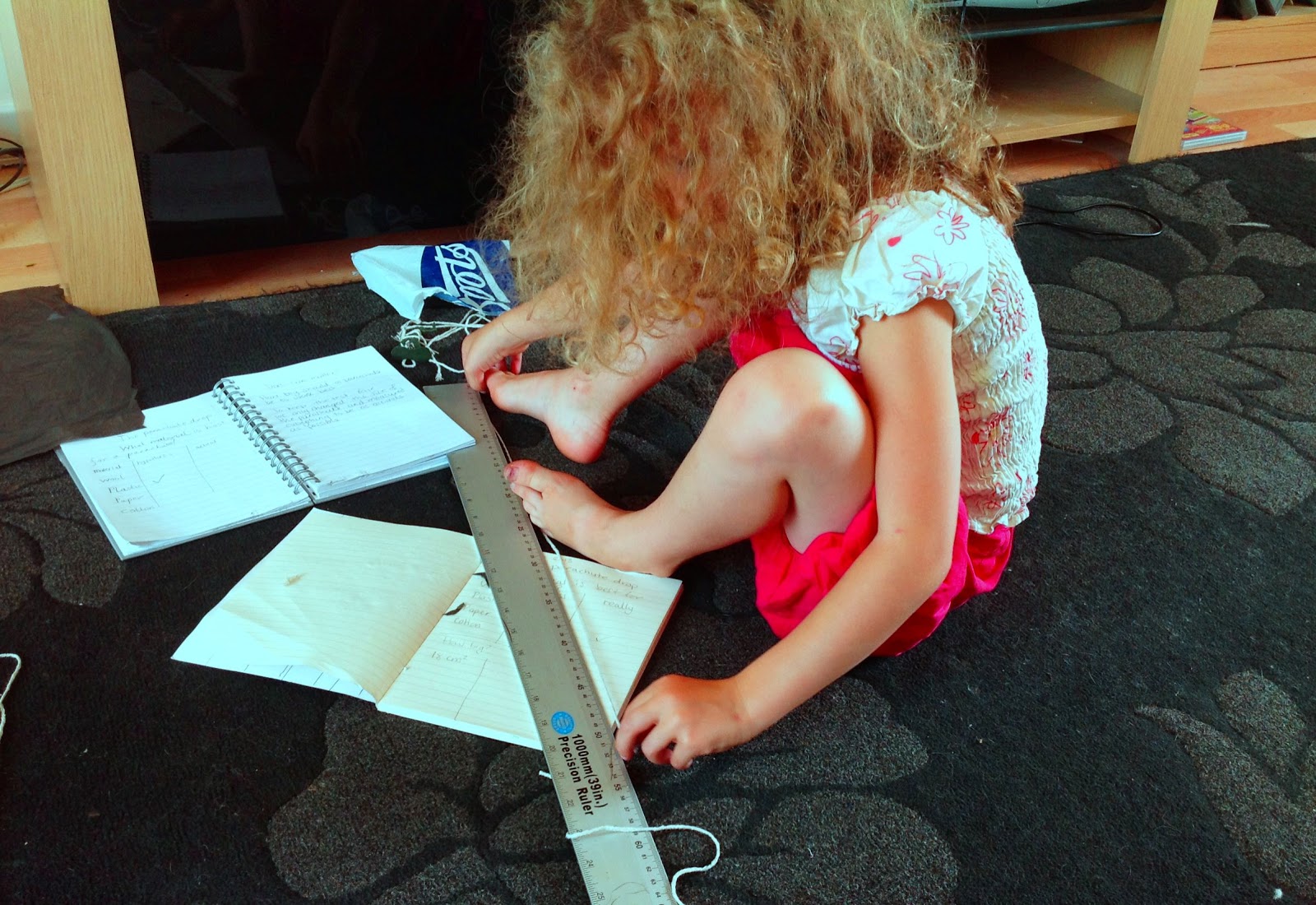 Then, apart from the woolly material that already had holes, we punched a hole in each corner of our material like this... 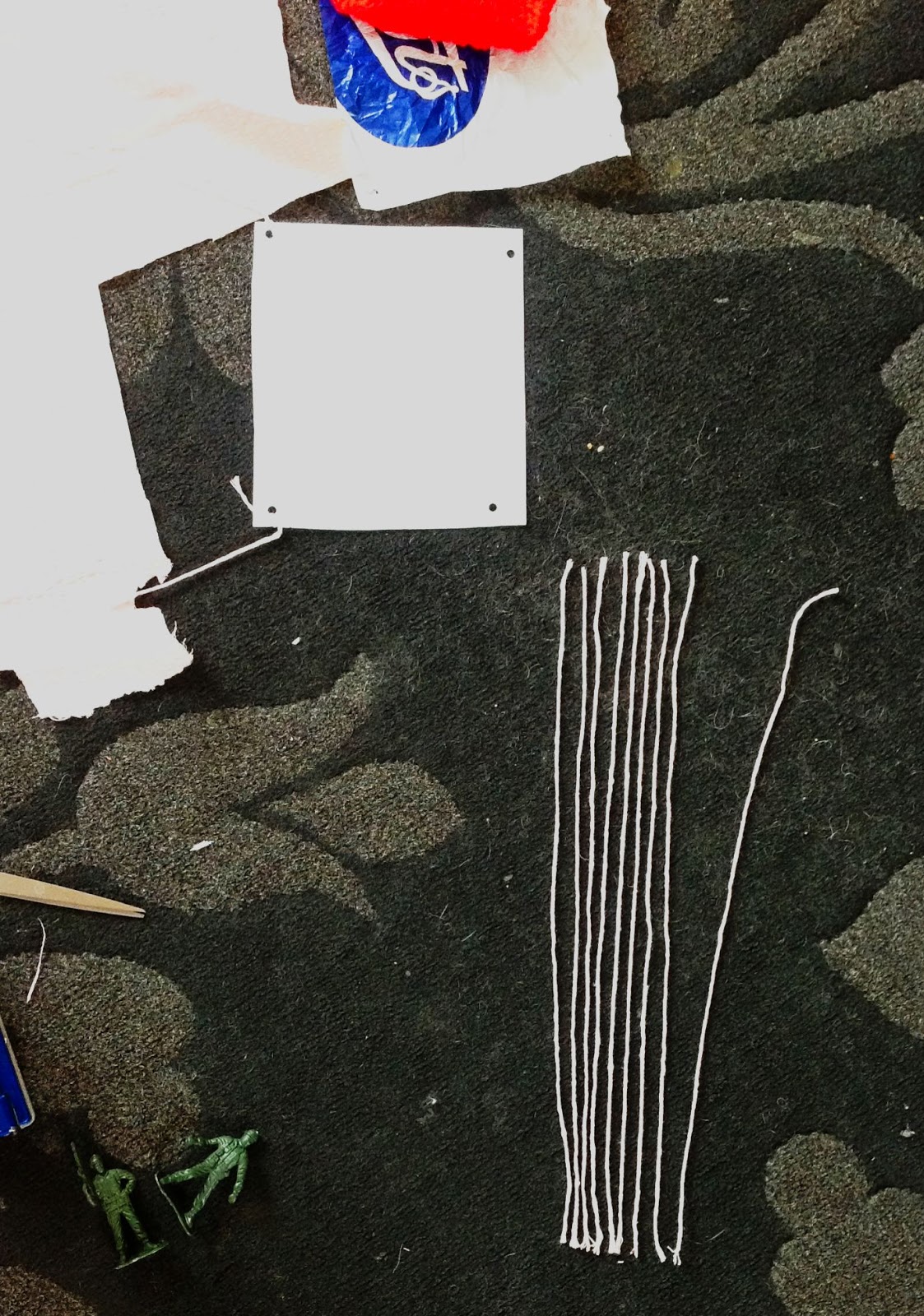 We used the same sort of army man figurine (from My 5 year old, Honi's set that was from 'Father Christmas' that he got from the real Andy's bedroom - got to love children and their imagination) attaching it to the other end of the four strings attached to the material like this... 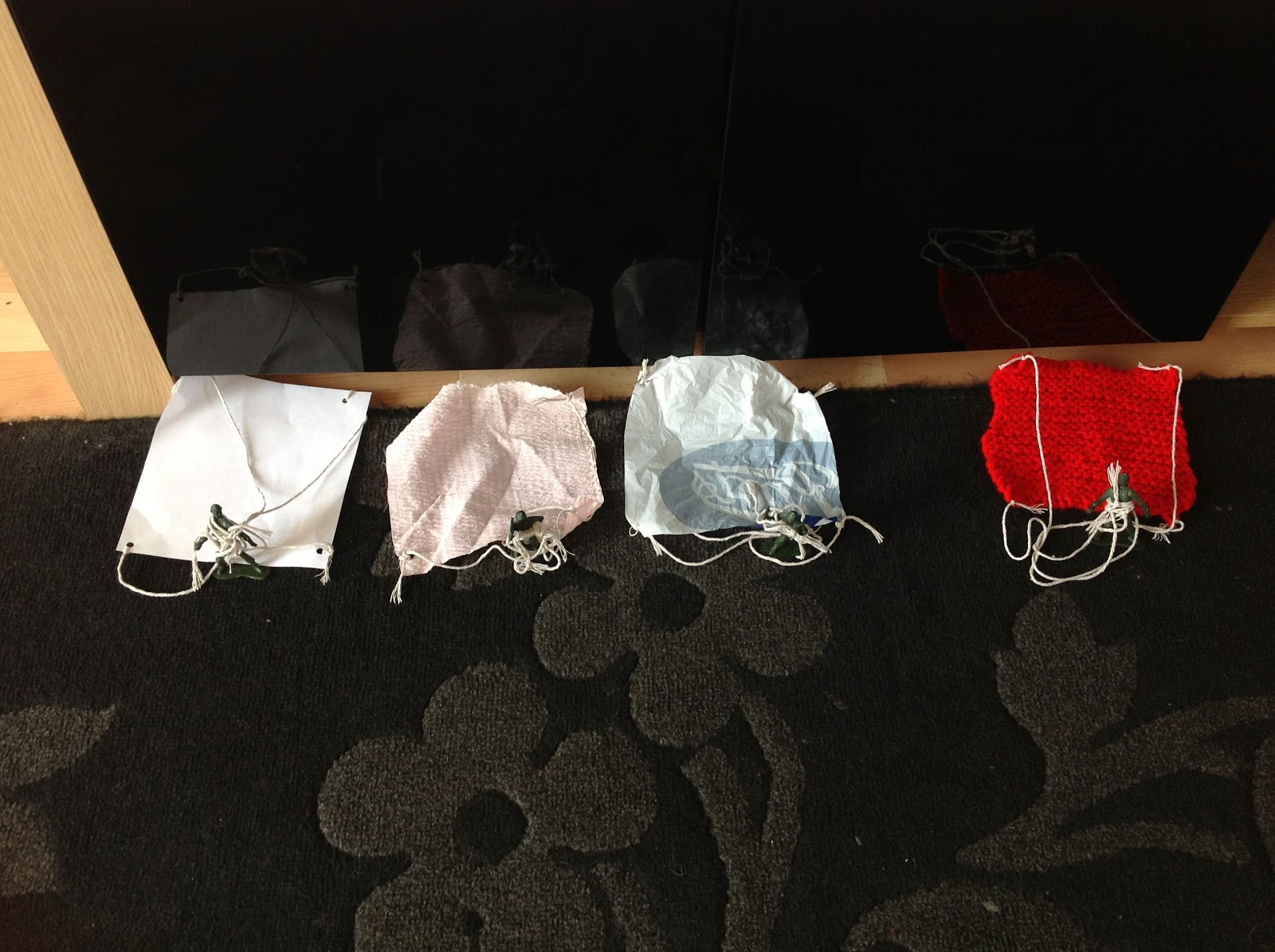 
What material is best? The paper and the plastic were nearly the same for us.
Why do you think that would be?  It is because of the tiny holes in the cotton and bigger ones in the wool this lets air go through the material therefore having a lower air resistance than the paper or plastic that has no holes, therefore 'resists more air' creating more drag.
TEST 2: The SIZE test
So now we know that something like paper or plastic would be best.  So we wanted to find out: Does size matter?
What we done for this was we tried three different sizes as we had 3 eager people wanting to make a parachute.
We had one that was 27cm squared, one that was 36cm squared and one that was 54cm squared.
There is some maths here.  Because we are now discussing the size of the parachute we are looking at it's surface area.  So our 27cm sided square of plastic bag has a surface area of 729cm2
This is because 27 x 27 (or 27 squared) is 729cm2
So the next size up would be 36 x 36 and the largest would be 54 x54.  I'll leave you to do the Maths (or a calculator).
Again we wanted a fair test so we made this the only difference so we made them all using plastic bags cut to size, all the string 50cm in length (Honi had great fun measuring it all out) and kept all the same Army men, threw them out of the same window and dropped them all at the same time, as we done in the previous experiment.
Again we wrote it down as a table and hypothesised first before observing what actually happens.
This was a great experiment and stirred a lot of excitement in our house.  The girls ran up and down the stairs in our house over and over again until their faces glowed red!
Other things you can do with this science project:
Include more maths:
Time how quickly, or in this case how slowly, the parachutes take to drop allowing for more information and leading to graphs being drawn  if you like.
You can investigate other variables here are a list of the variables I can thinks of:
Can you find your way to the perfect parachute? We had a lot of fun.  If you want to see our video of how it went you can check it out on An Ordinary Life's Facebook Page.
Here is a great video to follow on from this about skydiving but focusing on acceleration...


If you liked this project then you might like to check out An Ordinary Life's Science experiments page
Posted by Lisa Gwinnell at Wednesday, July 24, 2013