Science: how do birds fly? 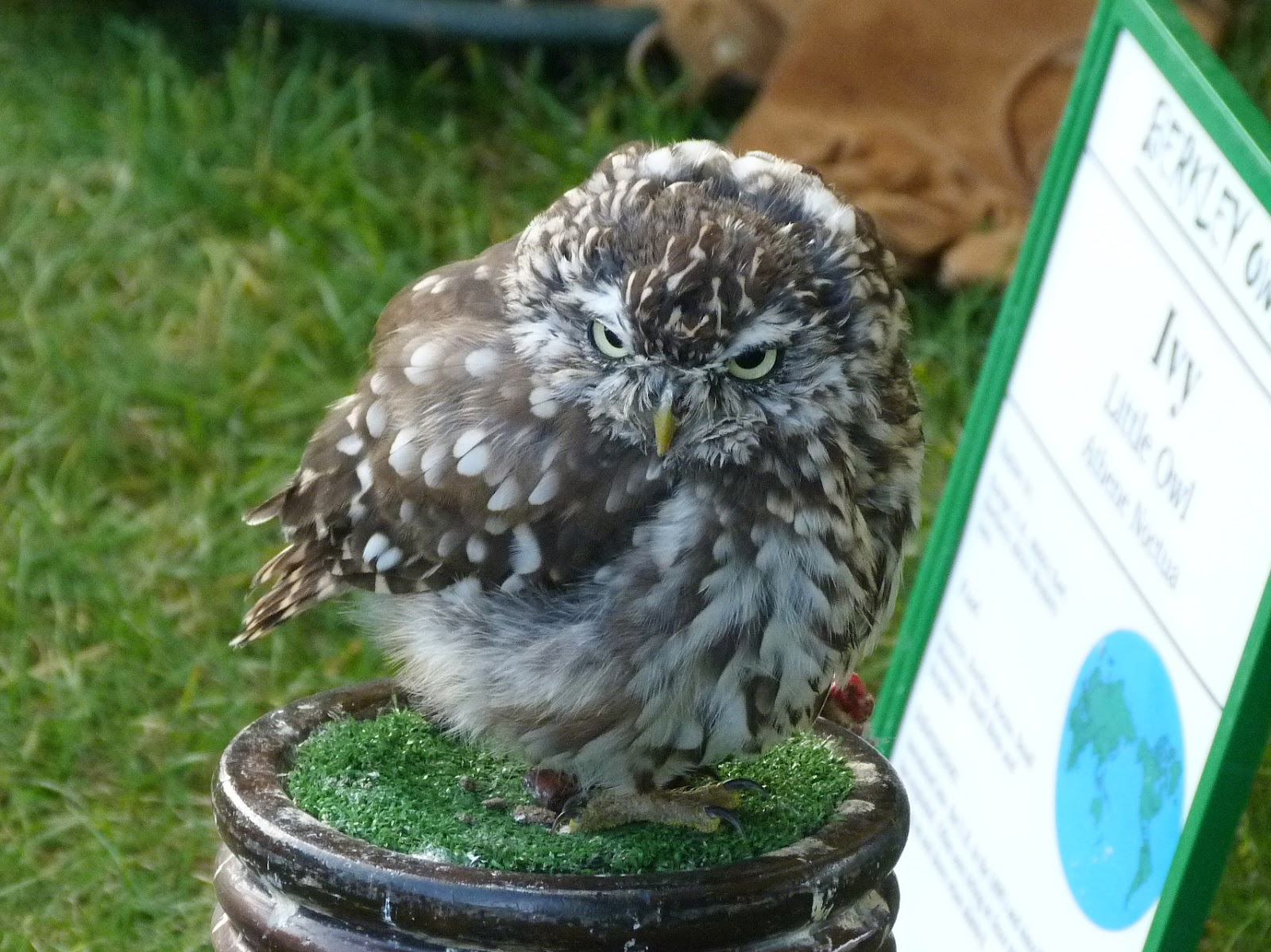 First of all I think we should talk about gravity after all it is what keeps us on the ground and not floating about the place. So how does a bird fight against gravity and soar so high?

Isaac Newton is the scientist who first realised that gravity is a force between two objects that draws them toward each other. The more mass an object has, the more it pulls other things toward it. This is why the earth has such a strong gravitational pull on us:  the object with the most mass, anywhere on earth is the planet itself, so gravity pulls everything down toward the centre of the earth.

So back to that question: how does a bird fight against gravity and soar so high?  To make it as easy as possible, think about helium balloons, why do they go up not down?


They soar up because helium has less mass than air does; it is because the air has more mass it has a stronger gravitational pull than the helium.  The helium balloon will stop rising but only when it reaches a level where the air is thinner, less dense and the mass is equal to the mass of the helium - there it will stay.
It's a bit like the gas version of the density experiment: Layers Of Liquids.
Birds are adapted to keep their mass as low as possible to help with flight in a few ways:


As in the recent science project I posted: How does a wing work? We learnt that the shape of the wing helps a bird to fly.
It is what's known as an aerofoil shape and is designed to generate as much lift -Lift being the pressure of air that keeps something like an aircraft in the air - in other words flight -  as possible while incurring as little drag (drag being the force that is created by too much friction between the air and the surface).
When it comes to the wing, to put it as simply as possible because there is more lift than drag and gravity there will be flight. 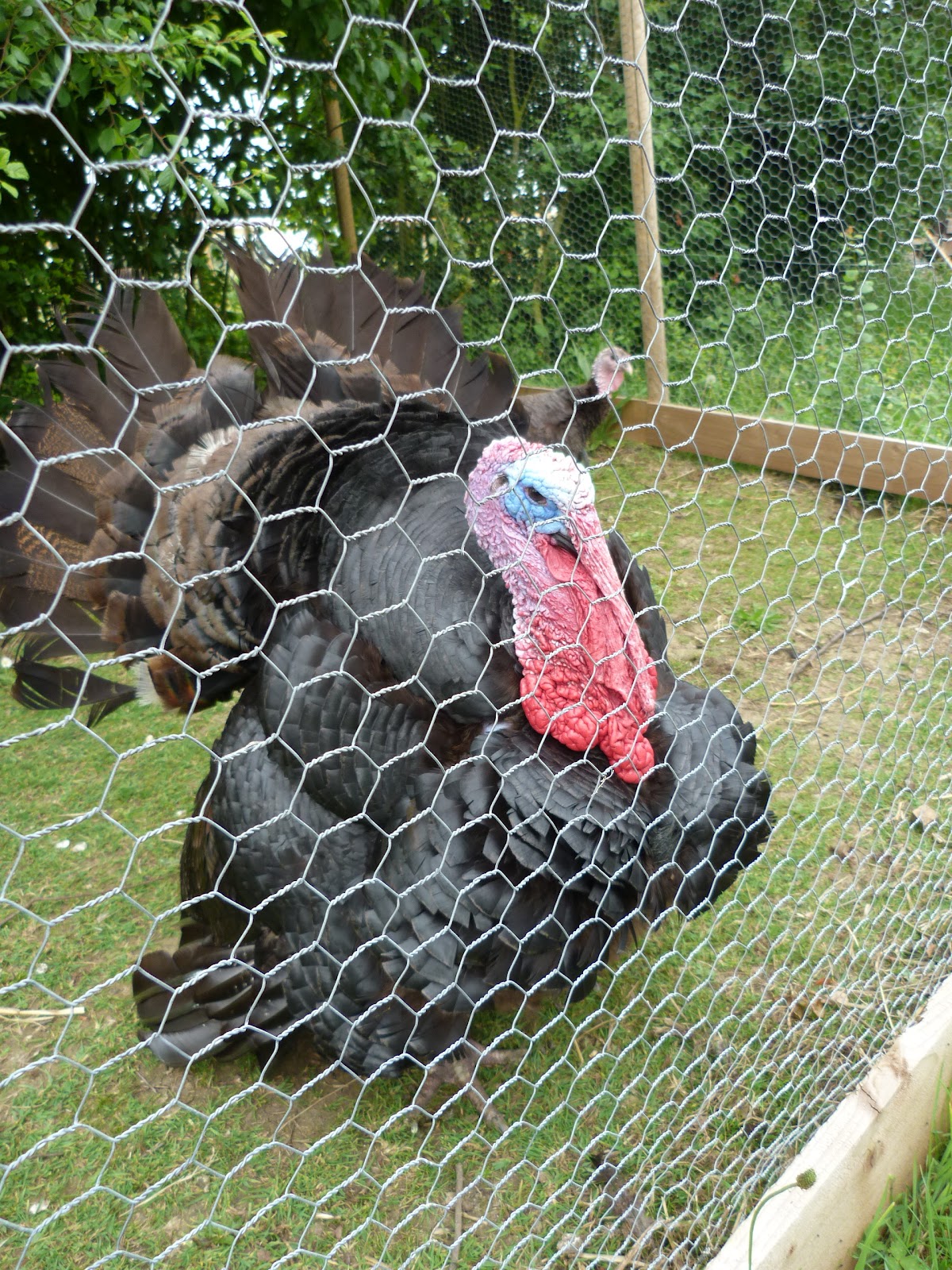 A body designed to fly
It's not just the wing of the bird that is designed for flight, their whole bodies have been designed to help the bird fly.
A bird's centre of gravity is in the balance point between its two wings and between its head and tail. To fly well a bird needs to have most of it's weight in the centre of gravity and very little weight in front or behind.  Their body is made in a way that this is possible, these are some of the ways they are designed to make this possible:


THE AERODYNAMICS OF IT
So how to they actually get up there?
To fly birds need to be able to do four things:
1. TAKE OFF - they need to get up into the sky.
2. MAINTAINING FLIGHT - they need to stay up there
3. STEERING THEMSELVES - move in the direction they want to go
4. LANDING SAFELY - come back down without crashing!

TAKE OFF
It's all about the wing!  The birds strong wings help, they flap their wings so powerfully that it helps in lifting them off the ground, however, no matter how hard and fast we flap our arms we wouldn't get very far off the ground so what is the difference?  It is because a birds wing is an aerofoil (aerofoil describes its shape).  You can learn about them in my other post How do wings work? 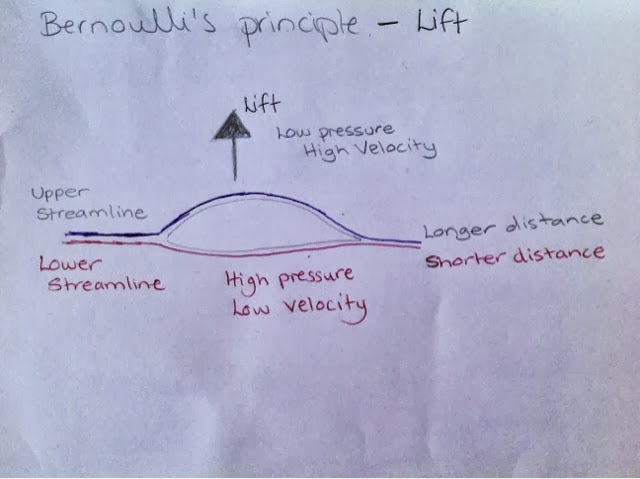 In short - when air comes straight towards a wing (an aerofoil) from facing directly into the wind or running fast into the air, the special shape causes the air to flow faster on top of the wing than under it. The faster air above it lowers the pressure - in a way sucking the bird up -  while the slower air below raises the pressure, this is what pushes the bird up; this is the force that raises the bird and in science we call it LIFT! 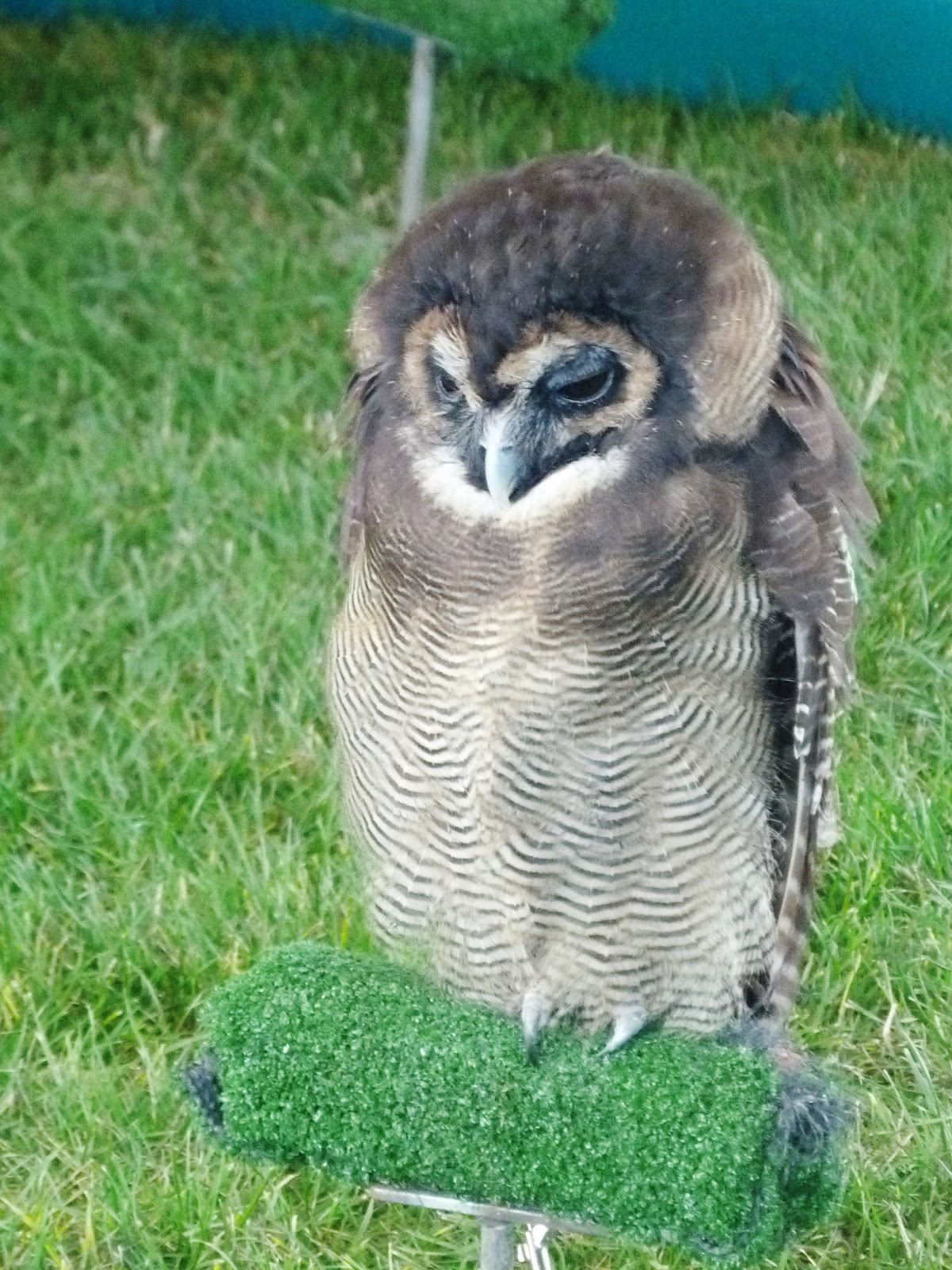 There are two flying techniques birds use to stay up in the sky There are:

THERMAL AIR CURRENTS - they are found in places where the air is warmer in one spot than the air next to it. A bit like in the summer when the sun heats the pavement a little more than the grass that is next to it.  The slightly warmer air in thermal air currents is slightly lighter than the cooler air and rises, this rising air can also lift light objects like feathers and hollow bones, so when a bird spreads it's wings it is lifted up with it.

UPDRAFTS (An upward current of warm, moist air)  This winds occur when wind hits an obstruction (when something like a building gets in the way).  The rushing air has to go somewhere so it is forced up and is strong enough to carry a bird up with it too.

Interesting fact about updrafts: With enough moisture, the current may visibly condense into a cumulus or cumulonimbus cloud.

MOVING CURRENTS - wind that is moving towards a bird with spread wings is able to hold it up thanks to those aerofoil shaped wings I keep telling you about.

EXAMPLES OF BIRDS THAT SOAR - Eagles, Kites, gulls, albatrosses, Terns and Pelicans among others.

Another way that A bird stays in the sky is by FLAPPING its wings!

When birds flap their wings it's not just a case of up and down, that flap up and down but they also twist their wings and fold their wings.  I liked the way it's explained in this...

As said in the video on the downward stroke the pressure is higher below the wing which is what causes lift.  As a bird moves forward, the rush of air over their aerofoil shaped wings causes more lift and keeps the bird in the sky for as long as needed.

Flapping birds tend to have shorter wings but they do need to move faster to be able to stay up there.  For example ducks can fly up to 60 miles an hour!

FLAPPING FACT: I read somewhere that for an ostrich to stay in the air it would have to take off and maintain a speed of at least 100 miles an hour!

Chiara, my 10 year old, pointed out at the park the other week a soaring bird that was going round and round in circles.  Why's it doing that she asked.  So here we are finding out...

Soaring birds take advantage of thermal currents and up drafts by flying in a circle.  It is the rising air that is carrying them higher and higher in a spiral (like a spiral staircase).  They can't hold stil and go straight up like this without moving forward on their aerofoil wings as they would simply drop to the ground.

The problem with this technique though is that they don't go in any special direction, they just get carried away so to control their direction, migrating birds that soar will allow the thermal currents to take them up with their wings spread out and then they will narrow their wings and glide in the direction they want.  When birds glide they move in exactly the same way as paper aeroplanes!  When they need more lift they will go in search of another thermal current to gain altitude (height).

Soaring birds, such as seagulls, that want to stay in the sky with out flapping in normal wind will usually fly into the wind to gain lift.  That same wind that holds them though will also slow their movements so to be able to get somewhere they make very small movements to enable them to turn slightly not and again.  So they gain lift for a while and them lose altitude, they go back down a bit again, when they choose the direction they want to go and then gain lift again.  This is what makes birds like the sea gull fly in such a zig-zag fashion.

Flapping birds are better at controlling their direction as they can control their lift more independently.  Since their forward momentum and the lift they get from flapping is more important than air currents, they can go where they like, all they need to do is point themselves in the right direction! 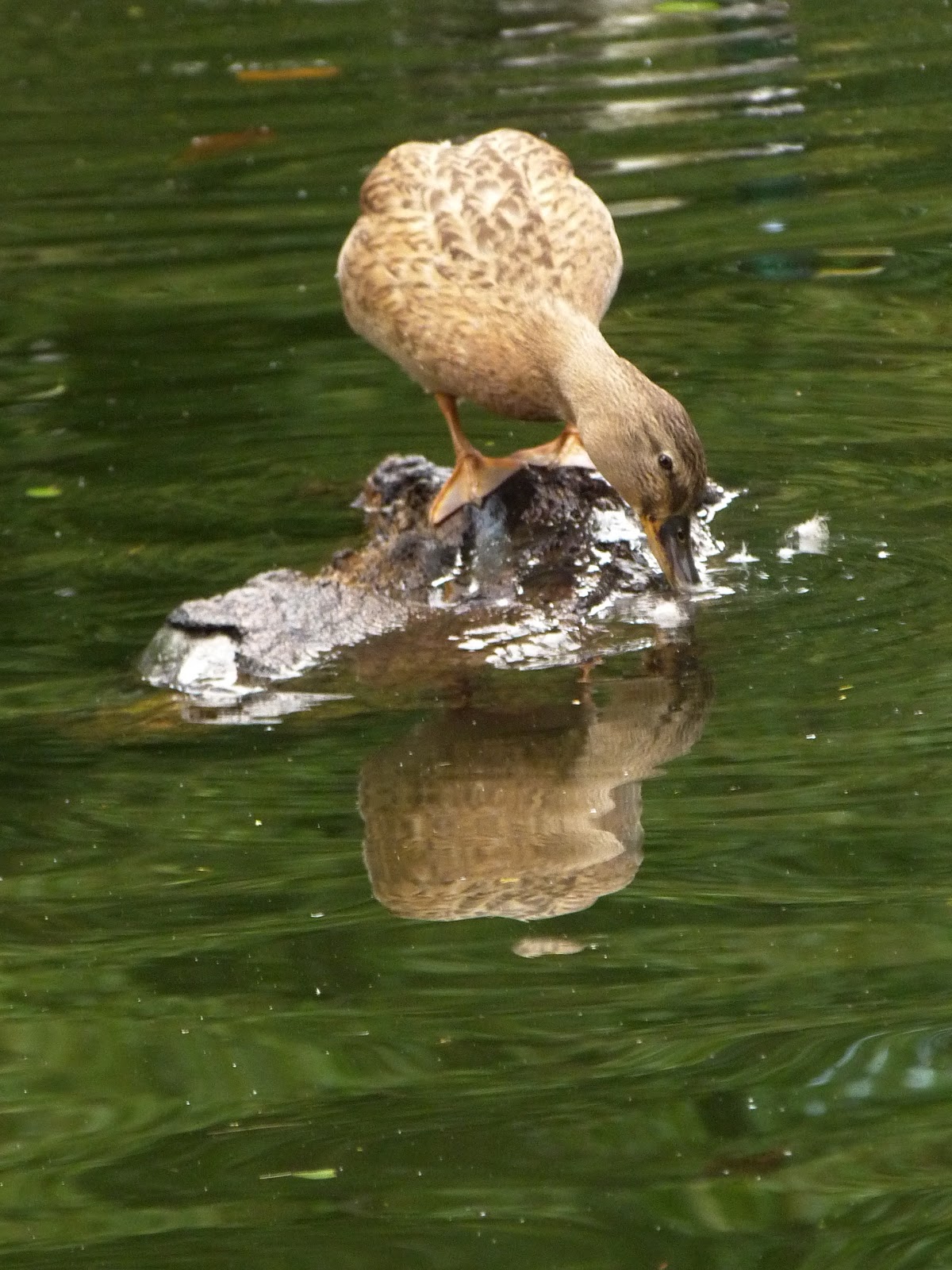 There are a lot of birds that fly fast until the last seconds like the friendly Robin.  To slow down quickly they change the angle of their wing to be higher and higher, increasing drag which slows down their forward movement and decreasing lift which lowers them down to the ground.

Some birds need to slow down for a longer time so they land safely. Most ducks, geese, and swans use their outstretched webbed feet as well as their open wings angled in a way to increase drag, this acts as brakes to slow them down.


When airplanes are in the sky, pilots tuck in the landing gear so it doesn't slow them down. Most birds do the same thing; they tuck their feet and legs beneath their tummy feathers. Birds with very long legs or legs too far back on their bodies don't normally tuck in their legs but leave them outstretched to create a different type of streamline again to reduce drag.

What we have learnt: