Yesterday we were busy seeing what else we could do with our glow sticks for our next science group.  We tried freezing the glow sticks and this is what we discovered... 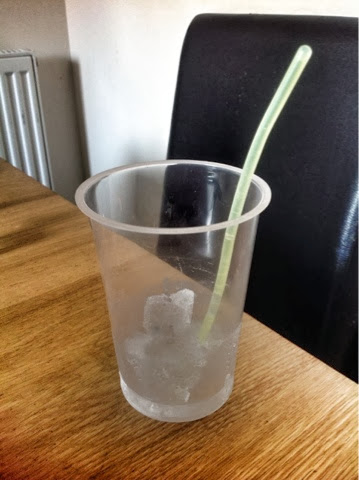 You can turn the glow on and off!
What you'll need if you want to try it out yourself:

Bend your glow stick first and give it a shake to make it glow.
STEP TWO

Put some ice into your jug, cup or plastic cup.

Sprinkle on some ice - 5ml should do.  This cools the ice down even further.


Place your glowing glow stick into the ice and wait 5 minutes.

STEP FIVE
Get the glow stick out.  What do you notice?
Even in a dark room, there is no glow on the cold area!
STEP SIX

Now try running it under warm water or submerge it in a cup containing very warm water (not too hot, not from the kettle).
What a happened?  The glow came back!

Glow sticks use a chemical reaction to produce light, when we bend the be we hear a crack this is because there is a fragile tube in the centre of it and this tube is full of hydrogen peroxide H2O2.  When we break the tube the hydrogen peroxide mixes with the chemical diphenyl oxalate C14H10O4 and fluorescent dye.  We shake the tube to speed up the mixing of the two chemicals.

This energy is then picked up by the dye molecules which become excited and release the energy that they have obtained from the chemical reaction between the hydrogen peroxide and the diphenyl oxalate and releases it again but this time as light.

Another produce given off in this reaction is carbon dioxide which is what those bubbles you can see in your glowstick are full of.

Chemical reactions like this rely on the collisions between the reagents (the hydrogen peroxide and the diphenyl oxalate ester particles).

This is why we shake our glow stick vigorously as we need them to bump into each other with as much force as possible to create as much energy as possible - much like the difference between walking into a wall and running into the wall, running into the wall will hurt more because the force was greater because there was more energy involved and more released at point of impact.

Temperature also effects energy, the warmer something is the more energy it has, it is the same with chemicals.  If you use warm water with your bread the bread will rise quicker than with cold water.

This is because the higher the temperature the faster the particles move.

When we put the glow sticks in the ice we are cooling it down so that the particles are moving so slowly they no longer collide quickly enough to collide hard enough into each other to have the energy to produce the light, hence the light fades completely.  When we put the glow stick back under a warm or fairly hot tap, you will see the glow return this is because the molecules have sped up and are bumping into each other with such force that we are able to see the reaction, the glow, once more.


This is a great example of how cold blood creatures like lizards, snakes and frogs need heat.  They, unlike warm blood animals like humans, can't produce heat themselves.  When they get too cold, they slow down and it can prevent them from being able to catch their dinner even.

They bask in the sun to warm up and this gives them the energy they need to go back to being full speed again!