This last week I have been thinking of the next science group and I want to make it even more hands on for the kids... 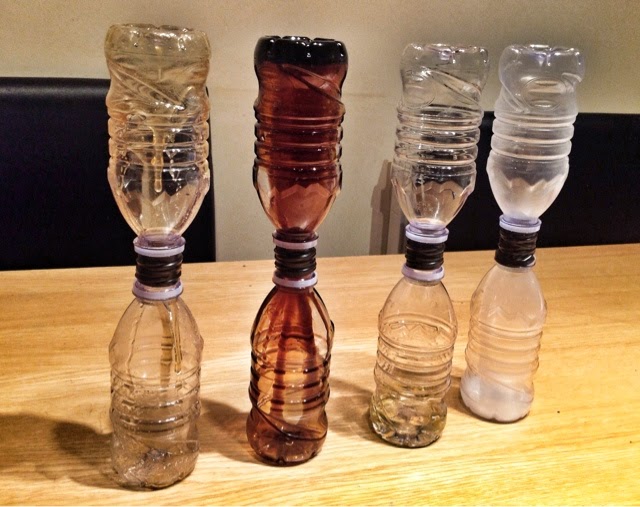 The next science session is about volcanoes and one of the things I want to do is to show the children about viscosity without them getting messy like it can be in The Lava Viscosity Test.
It is a great little experiment but it can get very messy with a lot of people around.  That is when I remembered something I had seen at The Science Museum last year.  I can't afford any specialist equipment but it did inspire me to start thinking about how it could be done using the things I have in the house and I came up with viscosity bottles!
It worked out great with my four girls; my girls could 'play' with science safely while I got dinner on and the three year old was thrilled that she could do science all by herself; learning more independently.
This is how I made ours and some ideas of how to turn it into a science experiment...

You will need:
STEP ONE
Put about 2cm high of oil in one bottle
STEP TWO
Put the second bottle on top and secure so nothing can leak out with electrical tape.
It's that simple.  You have made a viscosity bottle!
To make your other three viscosity bottles repeat STEP ONE and STEP TWO except using the treacle instead of oil.
Repeat again with golden syrup as your liquid for the last viscosity bottle use the washing up liquid.  This way you have four viscosity bottles ready to explore!
TIP: With the treacle and golden syrup I used a funnel to reduce the amount of mess.
You can just use them to observe how different liquids have different amounts of viscosity.
Other things you can try...
EXPERIMENT

DEFINITION OF VICOSITY: The state of being thick, sticky and semi-fluid in consistency, due to internal friction.