A no coat day at the Park!

Yesterday morning Honi started with her new Maths bean bag game she created which worked really well.  She called in Maths DINOSAUR bean bag game as she made her stepping stones dinosaurs but you could make them anything you like really. 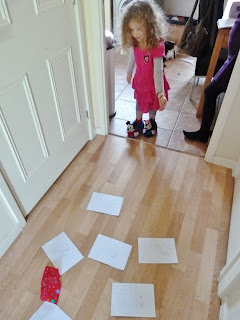 If you want to know how to play it click here.
In the afternoon we went to the park as the sun was shining and the air was much warmer than it has been in a long while; we even took our coats of as we walked round the park - that is how warm it was!
﻿ 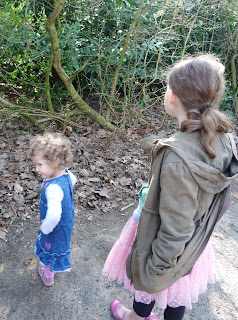 We walked through the nature reserve and hunted for creatures, we found none as Harmonie wasn't really good at staying quiet long, neither was Honi.  But we tried nonetheless... 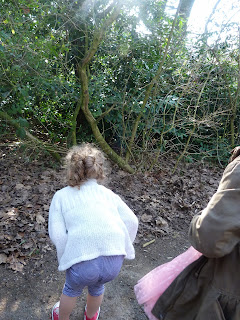 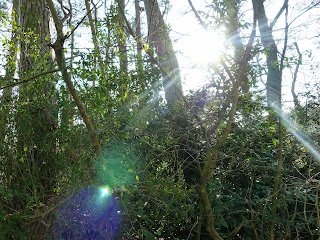 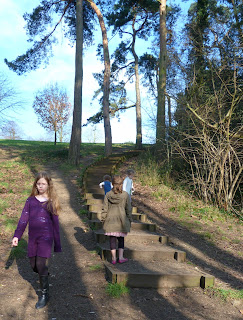 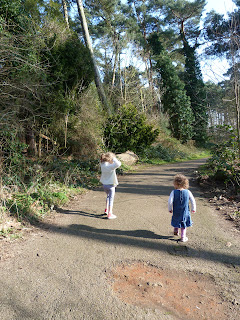 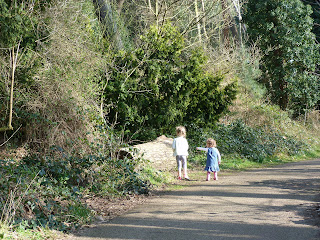 The pointy finger came out again too.  This time Harmonie was pointing at a large log saying 'Oh,no!  Tree fell over!' So... 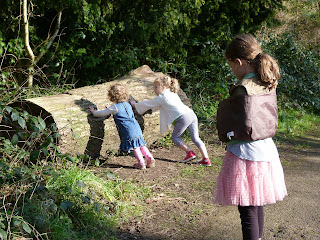 They tried pushing it back, hoping to make it 'right' again. 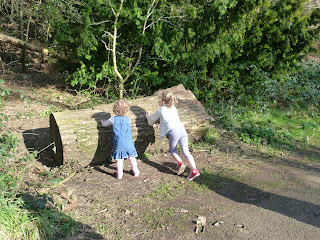 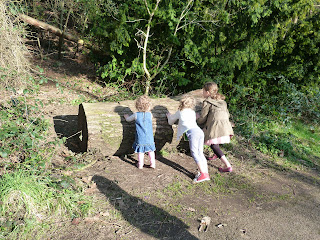 And they got Naomi to help too, but of course they failed as it was meant to be there. 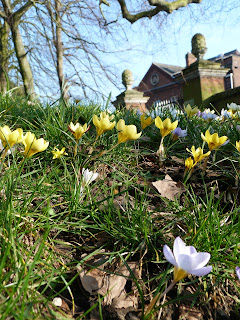 The Crocuses are just beautiful now.
We went to the play area too.  Harmonie even managed to climb one of the bigger slides which was frightening for me but she was thrilled: thrilled she managed it and thrilled that she was able to be part of her big sisters games! 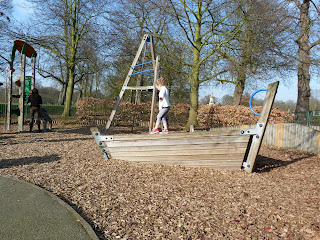 Honi praticed her free-running.
Then it all got too much.  Honi obviously needed the toilet but didn't want to leave the park and when I finally convinced her to leave she was in tears because she needed the toilet so badly.  Then once that was sorted we went into town to meet up with Daddy.
We had just got the coffee shop when Naomi looked for her coat.  She had lost her coat.  I couldn't go back though as the little ones were far too tired so I sat trying to keep my calm.  I told myself she didn't mean it, there was nothing more I could do about it and then Harmonie and Honi began to squabble.  In the coffee shop I raised my voice as Honi began hitting and kicking.  I threatened to go home and they begged me to stay, so I did as they immediately went back to being calm.
They were doing 'special' babyccinos for the children yesterday.  The girls had chocolate babyccino with caramel sauce on top.  Honi didn't like it.  What does Honi like?  I wonder to myself sometimes.  She got busy making her Monkey sock toy, a present she got from Chiara at Christmas.

When Kev rang I told him about the coat and he decided to pop to the park and see if he could find it.  Do you know he did!  What a star!
So that was our eventful afternoon.  I wonder what adventures there will be install for us today?  We've already made bread but the girls are whingy whiny at the moment as they went to bed so late.  Harmonie just wouldn't sleep in the end I put Naomi and Chiara to bed and they managed to settle her.  They rather enjoyed the challenge last night.  It hink they found it a challenge not to laugh at their cute and very funny little sister to be honest!
So I'm going to have a shower and then get on with the rest of the day I think... I hope all of you have a great day doing whatever it is you are doing today!
Posted by Lisa Gwinnell at Wednesday, March 06, 2013