This is a great experiment to play with the kids inside the house or in the garden on a warm day. 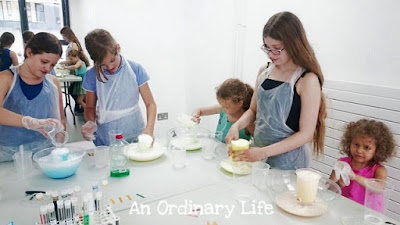 Here's how much fun it is...
How to set up the science play time!


I set the kids up with:


THIS IS A SAFE EXPERIMENT however: I always encourage goggles where chemical reactions are involved to get kids used to science safety.  It would also be a good idea to include aprons/overalls too.


THESE CHEMICALS ARE SAFE FOR CHILDREN TO TOUCH BUT SOME CHILDREN MIGTH BE SENSITIVE TO CITRIC ACID, IN THIS CASE TRY WHITE VINEGAR OR USE GLOVES.


Without touching anything myself, I asked them to put 3 teaspoons of the bicarbonate of soda in an empty disposable cup.  Then they added water so the cup was about quarter full.


Ask them to add three teaspoons of the citric acid to another disposable cup and then fill the cup half way up with water like the bicarbonate of soda.


The children stirred each cup, careful not to mix them up, using their spoons until the chemicals dissolved.  This meant they had made an aqueous solution.


Add some washing up liquid to the bicarbonate of soda solution, about 6 teaspoons will do but you could try 10 teaspoons!


Ask them to add the food colouring using the pipettes.  Kids always seem to love this bit.


When we get to the part where we are going to mix the solutions, before they do add it I always ask them to predict what they think might happen.


Talk to them about what happened in the neutralisation experiment.

It doesn't matter if kids guess wrong.  No reaction takes place at this point as the chemicals need to mix to be able to react with one another and we’re not ready for that.

Then they pour the citric acid on to the bicarbonate of soda solution, a little at a time, when it fizzes well, gently encourage them to watch the show.


I leave them too it at this point and let them explore with what they have.  This often occupies my kids for ages!  They could try stirring the solution or adding an extra colour to the cup that is overflowing with foam and see what happens!


The SCIENCE behind the fizz!


Acids and bases react when they are mixed together. In this experiment, the bicarbonate of soda (also known as baking powder) is the base and the citric acid, the acid.


The acid and the base are only react in an aqueous form; the chemicals in a solid state are unable to react unless the water is added, as they need to be dissolved.


The solids need to dissolve as this allows the ions in the acid and the base to move and collide with each other, causing a reaction to occur, the FIZZ!


WHEN this reaction occurs a gas is given off, this is carbon dioxide and what is left is trisodium citrate and water after the gas is released.
For those of you interested this is how the chemical formula looks:
C6H8O7 + 3NaHCO3 -> C6H5O7Na3 + 3CO2 + 3H2O
Citric Acid + Sodium bicarbonate -> sodium citrate + water + carbon dioxide


Other things you can try...


Try changing the temperature of the water, try warm water next.  Does it affect the reaction?
Posted by Lisa Gwinnell at Monday, June 15, 2015